Be on the Lookout: Four Red Flags in Bills that Will Chill Online Speech 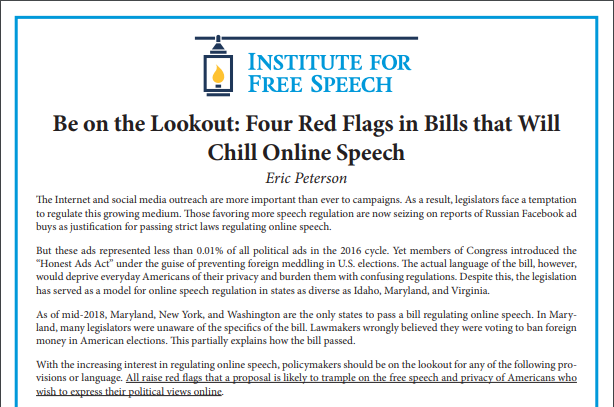 The Internet and social media outreach are more important than ever to campaigns. As a result, legislators face a temptation to regulate this growing medium. Those favoring more speech regulation are now seizing on reports of Russian Facebook ad buys as justification for passing strict laws regulating online speech.

But these ads represented less than 0.01% of all political ads in the 2016 cycle. Yet members of Congress introduced the “Honest Ads Act” under the guise of preventing foreign meddling in U.S. elections. The actual language of the bill, however, would deprive everyday Americans of their privacy and burden them with confusing regulations. Despite this, the legislation has served as a model for online speech regulation in states as diverse as Idaho, Maryland, and Virginia.

As of mid-2018, Maryland, New York, and Washington are the only states to pass a bill regulating online speech. In Maryland, many legislators were unaware of the specifics of the bill. Lawmakers wrongly believed they were voting to ban foreign money in American elections. This partially explains how the bill passed.

With the increasing interest in regulating online speech, policymakers should be on the lookout for any of the following provisions or language. All raise red flags that a proposal is likely to trample on the free speech and privacy of Americans who wish to express their political views online.

1) Regulating “Social Media”. If a bill purports to regulate social media, it deserves careful review. Social media is a vital outlet for free speech and press rights. Many measures aimed at regulating social media impose severe burdens. New laws in Maryland and Washington, for example, forced Google to temporarily refuse all state and local political ads in those states. Smaller websites and platforms may never be able to afford the associated compliance burdens. Some social media regulations may even impact citizens voicing their political opinions in Tweets and Facebook posts.

2) Applying TV and Radio Requirements to the Internet. Many proposals seek to import existing regulations on TV and radio to ads on the Internet. This is unwise because of the space and time restrictions for many online ads. Such requirements also ignore the fact that radio and television ads are usually aired in standard 30-second formats while online ads are rapidly evolving. Any proposal to allegedly “level the playing field” between these types of ads merits a skeptical eye.

3) Regulating “Qualifying Paid Digital Communications”. Maryland uses this definition in its legislation regulating Internet speech. That new law regulates online speech visible to only 500 individuals. Since almost all online ads may be “seen” by 500 or more people, whether or not they are clicked on or actively viewed, this definition would cover an almost limitless amount of grassroots political speech. Worse, the Maryland definition covers speech that “relates to” even a prospective candidate – not just an actual candidate. There is hardly any limit to how much online speech Maryland’s law could regulate, which raises a real risk of politicized enforcement.

The First Amendment is facing a new threat in state legislatures. A spate of bills that would regulate political and issue advertising on the ...