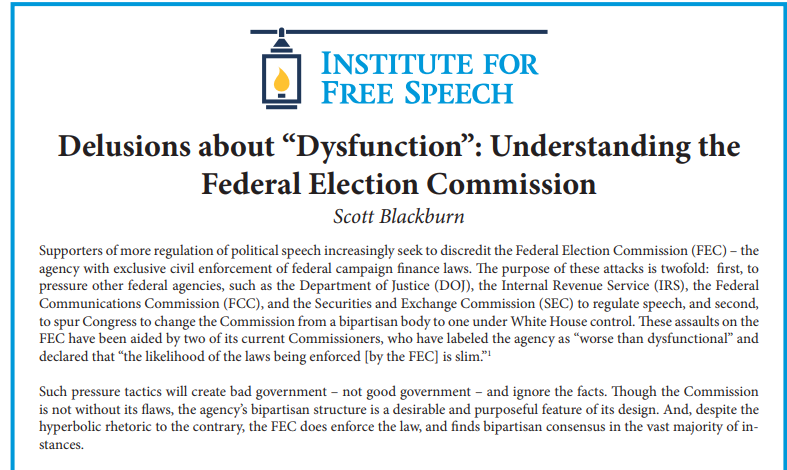 Supporters of more regulation of political speech increasingly seek to discredit the Federal Election Commission (FEC) – the agency with exclusive civil enforcement of federal campaign finance laws. The purpose of these attacks is twofold: first, to pressure other federal agencies, such as the Department of Justice (DOJ), the Internal Revenue Service (IRS), the Federal Communications Commission (FCC), and the Securities and Exchange Commission (SEC) to regulate speech, and second, to spur Congress to change the Commission from a bipartisan body to one under White House control. These assaults on the FEC have been aided by two of its current Commissioners, who have labeled the agency as “worse than dysfunctional” and declared that “the likelihood of the laws being enforced [by the FEC] is slim.”[1]

Such pressure tactics will create bad government – not good government – and ignore the facts. Though the Commission is not without its flaws, the agency’s bipartisan structure is a desirable and purposeful feature of its design. And, despite the hyperbolic rhetoric to the contrary, the FEC does enforce the law, and finds bipartisan consensus in the vast majority of instances. This Issue Brief describes three important features of the FEC.

I. The Federal Election Commission’s structure is intentionally bipartisan due to concerns about how President Nixon used the powers of government against political enemies.

The FEC was created after the Nixon Administration’s Justice Department pursued criminal campaign finance charges against the President’s critics. The Nixon DOJ also threatened The New York Times with criminal charges if it published ads critical of the President. Congress correctly rejected the idea of letting a future president effectively control a government agency tasked with regulating political speech.

Because the Commission is comprised of six commissioners – with no more than three from one political party – any action to sanction a speaker or approve an advisory opinion or a new rule necessarily comes with at least some measure of bipartisan support, as at least four votes are required in such cases. Those pushing for ever more government regulation of political speech have long argued that this structure means that the FEC was “intended for gridlock” or “designed to fail,” but the truth is that the Commission was intentionally designed to avoid becoming a political weapon of the party in control of the White House. In deliberating its creation, Congress understood that the FEC would have a direct impact on election campaigns in a way that other federal agencies do not. If, therefore, it is to be viewed as legitimate, the FEC requires a structure that maximizes bipartisanship.

But even without Nixon’s targeting of political opponents, it is easy to see that any rules established by such a commission, or enforcement undertaken, would be easily discredited if perceived to be an effort to help the party in control of the FEC. Even those who believe there is little to the recent “John Doe” investigations into conservative groups in Wisconsin and the IRS targeting of Tea Party groups should see that the process must be perceived as fair and nonpartisan.

Thus, claims by some that the FEC is “gridlocked” are misleading. The FEC’s bipartisan design – unlike the nominally nonpartisan Nixon Justice Department or the IRS – is what allows its regulations to carry weight. If not for this bipartisan design, every FEC action would be tinged with politics and viewed by some as illegitimate.

Republican and Democratic Commissioners on the FEC come to consensus most of the time. In 2014, the commission achieved bipartisan consensus (either a 6-0, 5-1, or 4-2 decision) on 93% of all votes. On substantive matters, bipartisan agreement was reached on 86% of votes.[2] With only 14% of substantive votes resulting in 3-3 splits, talk of “dysfunction” is vastly overstated.

What the FEC’s critics fail to mention is that those uncommon 3-3 splits represent not lawlessness, but a good faith difference of opinion about how to interpret certain contentious aspects of campaign finance law.

III. Despite statements by the Commission’s detractors, the FEC is enforcing the law.

Squabbles over highly complex elements of campaign finance law receive an inordinate amount of media attention relative to coverage of the FEC’s day-to-day activities. But this focus ignores the fact that most interpretations of campaign finance laws are uncontroversial. Only a small minority of legal questions cause public disagreement.

Contribution limits and government reporting of the personal information of contributors to candidates, political parties, and political committees form the backbone of 1970s-era federal campaign finance laws enforced by the agency. The FEC continues to enforce these regulations without controversy. Far from ignoring the law, political actors meticulously follow these complex regulations specifying how, when, and what to report to the agency. Indeed, the very activist groups and columnists who pen screeds about the inability of the FEC to enforce campaign finance laws rely on information obtained from compliance with FEC regulations.

If the FEC had truly become a toothless enforcer of the law, campaigns would begin to ignore contribution limits and disclosure requirements. But nothing could be further from the truth – campaigns continue to abide both by contribution limits, refusing to accept individual donations over the $2,700 per election limit, and by disclosure rules, reporting the names, addresses, occupations, and employers of an entity’s donors to the FEC. And, in the event such rules are violated, the FEC acts quickly to rectify the situation and impose penalties, where appropriate.

When faced with misleading stories about the FEC’s “dysfunction” and “gridlock,” it’s important to remember the reason for the Commission’s bipartisan design. Over the past several years, we have seen scandal, fraud, and failure at numerous federal agencies, from the IRS to the National Security Agency to the Secret Service. By comparison, substantive policy disagreements at the FEC seem minor. Despite its imperfections, calls for major changes to the agency need to be viewed as what they really are – posturing for new regulations on political speech by non-expert agencies like the IRS, FCC, and the SEC.