In Defense of “Super PAC’s” and of the First Amendment 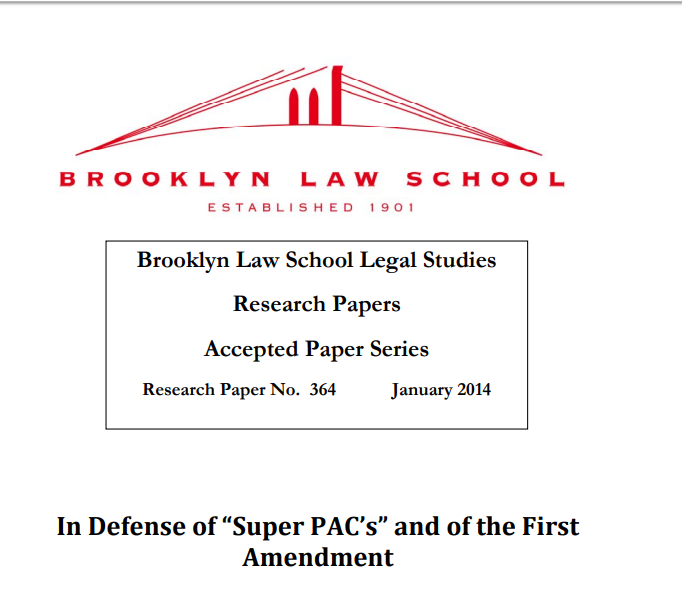 In this article, CCP Academic Advisor and Brooklyn Law School Professor Joel Gora offers a defense of “Super PACs” and of the First Amendment principles that they embody; namely, that in order to make our democracy work, we need a robust, wide-open and uninhibited discussion of politics and government. Although Super PACs have gotten bad press and have been widely condemned as a threat to democracy, they are really nothing new. Super PACs trace their origins back to Buckley v. Valeo, the Supreme Court’s landmark 1976 free speech ruling, which rejected any justification for limiting independent expenditures for political speech. Thus, the day after Buckley, individuals and groups were free to spend whatever they wished to support or oppose political candidates. Whether they were allowed to join together for such purposes was less clear.

In 2010, the Supreme Court’s decision in Citizens United removed any lingering doubt by holding that any speaker – individual, corporate, union, or non-profit – was free to make independent expenditures without prohibition or limitation. Based on those principles, a federal appeals court easily and unanimously ruled in SpeechNow.org v. FEC that what one person or group could do individually, several people or groups could do cooperatively – namely, pool their resources to get out their common message. That, in essence, is a Super PAC.

As a result, Super PACs played a noticeable role in the 2012 federal elections. But despite popular misconception, they did not dominate or control those elections (they accounted for only 10 percent of campaign spending), almost all contributions to them were fully and publicly disclosed, and almost no corporations played any role in any Super PAC’s spending. Indeed, so far as is known, not a single Fortune 500 company spent even a dollar to support a Super PAC. Rather, as the article explains, Super PACs enabled more speech and debate in our political process, a result to be desired most significantly under the First Amendment. Rather than being a threat to democracy, Super PACs have been a boon.

A Survey of Campaign Finance and Lobbying Laws in the 50 States, District of Columbia, New York City, and Seattle

The Institute for Free Speech (“IFS”) has reviewed the laws in all 50 states, the District of Columbia, New York City, and Seattle regulating ...

Two years and two election cycles into the Super PAC era, the media firestorm against free speech and association has been palpable. A Google search ...