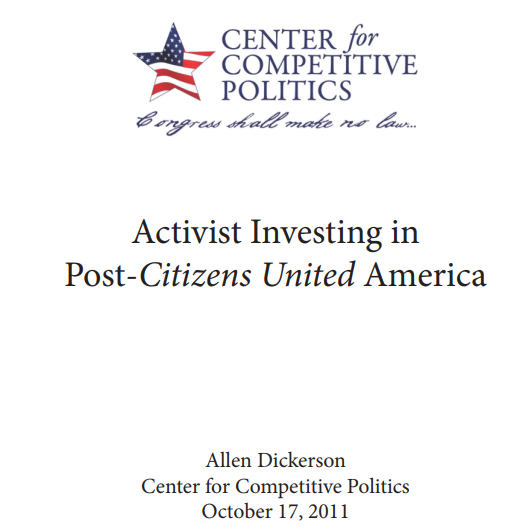 In the wake of last year’s U.S. Supreme Court decision in Citizens United v. FEC, the scope of political speech protected under the First Amendment has substantially expanded. Whereas corporations and unions were previously prohibited from directly advocating for and against political candidates by spending funds from their general treasury, the Supreme Court has now recognized that those viewpoints are important components of the national debate by which we Americans govern ourselves, and that the First Amendment does not permit the government to suppress or stifle those voices.

But this decision has been controversial. Many object to the Citizens United decision because of a general view that money spent in the political process is somehow inherently corrupting or distorting. Others – especially those from within the environmental and labor movements – see for-profit corporations as their political enemy, and seek partisan or ideological advantage by squelching corporate political speech while their own speech remains unencumbered.

Issue Analysis No. 7: Do Limits on Corporate and Union Giving to Candidates Lead to “Good” Government?

Since the Supreme Court’s 2010 decision in Citizens United v. FEC, which freed corporations and labor unions to finance independent expenditures in support of federal candidates, the ...

That wealthy individuals, corporations and unions, or well-funded associations of people should make large contributions to parties and candidates, and that expenses in political races ...