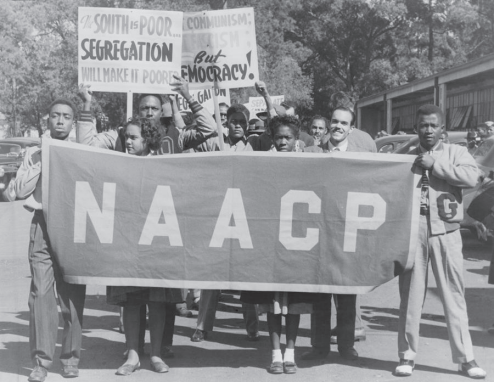 “It is hardly a novel perception that compelled disclosure of affiliation with groups engaged in advocacy may constitute as effective a restraint on freedom of association as [other] forms of governmental action.”

The freedom to associate with others and speak as a group is foundational to democracy. Individuals rarely can change their society, government, or laws on their own. Instead, they join groups with other Americans who share their values. Whether you want to promote environmental protection, lower taxes, more gun control, greater freedom of speech, or something else entirely, there’s an organization dedicated to your cause.

In order for these groups to be effective, Americans must be able to associate with their fellow citizens privately. People behave differently when they are being watched, and this is especially true when people are monitored by the very government they are trying to reform. The right to privacy is therefore essential to the protection of First Amendment freedoms.

To understand the vital relationship between privacy rights and freedom of association, we need only look to the landmark 1958 Supreme Court case, NAACP v. Alabama.

I. Disclosure “chills” freedom of speech and association.

In the 1950s, the state of Alabama attempted to force the National Association for the Advancement of Colored People (NAACP) to provide State authorities with a list of all its members’ names and home addresses. A leading force in the burgeoning civil rights movement, the NAACP was highly controversial at the time, especially in southern states. If its individual members were identified, they would be at risk of harassment and intimidation – or worse – from opponents of civil rights. Such retaliation may have even been the outcome state officials had in mind when they made the demand.

Recognizing the inextricable link between privacy and freedom of association, the Supreme Court unanimously ruled that the government could not force groups to surrender their member lists. Such “exposure”, as the High Court termed it, would greatly damage organizations’ ability to fulfill their missions. In the words of the Court, Alabama’s demand restricted free association rights because it “may induce members to withdraw from the Association and dissuade others from joining it because of fear of exposure of their beliefs…”[1] Today, this is commonly described as disclosure’s “chilling effect” on freedom of speech and association. Thanks to the Court’s ruling, nonprofits and other civic organizations have flourished in America with the knowledge that the private information of their supporters will be protected.

II. Privacy rights are just as important today as they were in the past.

Sixty years after the Court’s decision, groups do not experience the intense dangers that civil rights advocates faced in the mid-20th century. However, people with controversial views still face threats identified in the Court’s ruling, such as “economic reprisal, loss of employment, threat of physical coercion, and other manifestations of public hostility.”[2] Evidence of politically-motivated harassment in 21st century America has been cited in Supreme Court opinions, testimony before Congress and state legislatures, and countless media reports. The threats can come from politicians, corrupt bureaucrats, employers, online trolls, or even just a nosy neighbor.

In some ways, the threat of disclosure is greater today than ever before. Thanks to the Internet, once your political affiliations are publicized, that information is always just a few clicks away. Some opinions that are mainstream today may be considered extreme in the future, giving us even more reason to shield people from the prying eyes of government disclosure mandates. Everyone has the right to support causes they believe in without fear of intimidation or harassment. Privacy offers the protection Americans need to fully exercise their First Amendment rights.

III. Disclosure laws today are more extensive than ever before – and growing all the time.

Despite NAACP v. Alabama’s definitive endorsement of privacy in association, the Court has upheld some disclosure laws as constitutionally permissible. On the federal level, Americans who give over $200 to  candidate campaigns, political parties, political committees, and super PACs, must have their name, address, occupation, and employer publicly disclosed and posted in a searchable, government-maintained database. In addition, states and many localities operate their own campaign finance disclosure laws. Efforts today to expand these laws, however, to regulate more types of speech and more kinds of groups – often those engaged in policy advocacy like the NAACP – represent a major threat to First Amendment rights.

Promoted in the name of “transparency,” these proposals have passed in a handful of states. So far, the Supreme Court has generally avoided ruling on their constitutionality. Regardless, these laws are bad policy, because they turn the concept of transparency on its head. Instead of allowing citizens to see the inner workings of government, these new disclosure laws, like Alabama’s demand of the NAACP, empower the government to monitor its citizens. In addition, grassroots and volunteer-led organizations often struggle to comply with the complex government reporting requirements included in these laws. As a result, disclosure shifts the political playing field in favor of already powerful interests, for whom compliance is simply a matter of hiring the right (and expensive) attorneys.

Transparency is an important value – when applied to government. Citizens, however, have a right to privacy, including in their political affiliations and beliefs. NAACP v. Alabama offers perhaps the clearest picture of the dangers of disclosure, but the threat articulated by the Court continues to exist to this day. The “chilling effect” of compulsory disclosure should not be underestimated, especially in an era of instant internet access, twitter mobs, online bullying, and a charged and highly partisan political atmosphere.

Groups of engaged citizens are not a threat to democracy – they are manifestations of democracy. Advocates for free speech and limited government must follow the example set in NAACP v. Alabama and speak out against disclosure laws that restrict Americans’ ability to participate in civil society.

On April 2, 2014, the Supreme Court issued its decision in McCutcheon v. Federal Election Commission.[1] In that case, plaintiff Shaun McCutcheon challenged the ...