“Paid For By”: Principles for Accurate and Effective Political Ad Disclaimers in the 21st Century 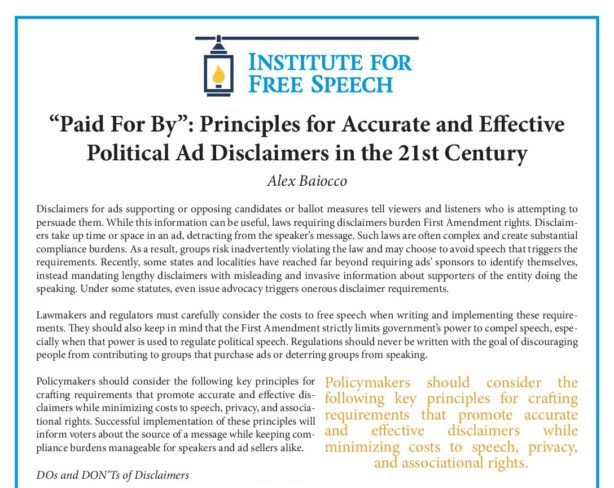 Disclaimers for ads supporting or opposing candidates or ballot measures tell viewers and listeners who is attempting to persuade them. While this information can be useful, laws requiring disclaimers burden First Amendment rights. Disclaimers take up time or space in an ad, detracting from the speaker’s message. Such laws are often complex and create substantial compliance burdens. As a result, groups risk inadvertently violating the law and may choose to avoid speech that triggers the requirements. Recently, some states and localities have reached far beyond requiring ads’ sponsors to identify themselves, instead mandating lengthy disclaimers with misleading and invasive information about supporters of the entity doing the speaking. Under some statutes, even issue advocacy triggers onerous disclaimer requirements.

Lawmakers and regulators must carefully consider the costs to free speech when writing and implementing these requirements. They should also keep in mind that the First Amendment strictly limits government’s power to compel speech, especially when that power is used to regulate political speech. Regulations should never be written with the goal of discouraging people from contributing to groups that purchase ads or deterring groups from speaking.

Policymakers should consider the following key principles for crafting requirements that promote accurate and effective disclaimers while minimizing costs to speech, privacy, and associational rights. Successful implementation of these principles will inform voters about the source of a message while keeping compliance burdens manageable for speakers and ad sellers alike.

DOs and DON’Ts of Disclaimers

1) The most effective disclaimers are short and simple. In an age when campaign finance reports are readily available online and most speakers have websites, a simple “Paid for by…” disclaimer is sufficient to identify an ad’s sponsor. Interested parties can seek out additional information about a particular group in government records or elsewhere. Requiring too much information in a disclaimer infringes on the right to free speech. On a practical level, it substitutes legalese for the speaker’s message while overwhelming viewers. Lengthy disclaimers that take away significant time or space from a speaker’s message are both unnecessary and ineffective. Laws requiring such disclaimers may also be unconstitutional.

2) Disclaimers must be practical, and exemptions for certain types of ads should be permitted. Disclaimer requirements must take into account the wide variety of advertising methods speakers may wish to utilize. If the mandated disclaimer takes up the majority of an ad, the speaker’s message will be overwhelmed by the government’s, and speakers will not use such ads. Some forms of communication, such as small or short ads, may require an exemption from disclaimer requirements or allow for an alternate form of the disclaimer. This is true, for instance, of items such as bumper stickers, campaign buttons, and certain types of online or mobile advertising.

3) Disclaimer requirements must be clear. Speakers and ad sellers need to know whether particular communications trigger disclaimers and when relevant exceptions apply. They must also be sure of how to comply with any requirements when engaging in regulated activity. Faced with uncertainty, citizens may choose to avoid speaking for fear of unintentionally violating the law and incurring fines. Vague or complex rules also discourage speech by leaving room for inconsistent and arbitrary enforcement.

4) Disclaimer laws should allow for future technological development. Innovations in technology that create new platforms for political speech have the potential to improve democracy by empowering citizens and increasing civic engagement. Disclaimer laws should be carefully crafted to avoid making it impossible to use new methods of communicating. Policymakers should plan for the future and avoid unintentionally prohibiting compliance with disclaimer requirements on specific technologies. This is especially true in the fast-moving and ever-changing realm of internet advertising, which has produced, and will continue to produce, new and short ways of conveying a message.

5) Disclaimer requirements should not mandate a particular script. Instead, they should clearly specify what information must be provided and allow speakers to craft their own wording to convey that information. Government-drafted scripts for disclaimers often require long words or introduce unnecessary phrases, depriving speakers of valuable time or space. For example, why should a disclaimer require the word “advertising” when “ad” says the same thing with three fewer syllables? Why require the unwieldy phrase, “… is responsible for the content of this advertising,” instead of allowing the simpler and shorter, “Paid for by…”? Such wording mandates harm the First Amendment rights of speakers by forcing them to speak the government’s message instead of their own. Statutes that allow flexibility enable speakers to transmit the required information while retaining the ability to deliver their message in the most effective manner.

6) Disclaimers should not include meaningless information. Ads are often required to include information of no value to the viewer. For example, an ad purchased by a candidate’s campaign committee is clearly expressing that candidate’s views. The common disclaimer language, “I approve this message” is unnecessary. Similarly, requiring a group’s CEO or other leader to appear on-screen to speak the disclaimer increases the cost of the ad and provides no useful information. Including irrelevant information in disclaimers detracts from the speaker’s message, lessens the effectiveness of the disclaimer, and may bias viewer or listener perceptions of the ad.

7) Disclaimers should not require a list of top funders. Disclaimers cannot be informative if they are misleading. Requiring that a disclaimer list an organization’s top donors wrongly conflates general support for a group with support for a particular ad’s message. These requirements actively mislead the public by associating individuals with specific communications they may have no knowledge of and with which they may disagree. This is especially troubling when applied to groups that devote only a small portion of their overall budget to political speech. If policymakers insist on requiring a list of top funders in ad disclaimers, they should only include those who gave or were solicited to fund that particular ad.

8) Disclaimers should not be required for issue advocacy. Disclaimer requirements should only apply to ads that expressly support or oppose candidates or ballot measures. Issue speech – ads about public policy – should not be subject to such regulation. In examining the constitutionality of speech regulations, the U.S. Supreme Court has distinguished campaign-related “express advocacy” from issue advocacy. The Court has held that the First Amendment does not permit government regulation of issue speech and that groups engaging in such speech have a right to privacy in association. Any application of disclaimer requirements to issue advocacy may be unconstitutional.

Political ad disclaimers sound simple enough in theory, but too often, policymakers rush to action without paying enough attention to the details. Poorly drafted disclaimer rules chill speech about candidates and issues, mislead voters, and bias viewer perceptions of political messages. To avoid these outcomes, policymakers should ensure that the information required in disclaimers is useful and that compliance with the rules is easy.

Political advertising can increase voter interest and knowledge about elections, promoting civic engagement. Sensible disclaimer requirements aim to facilitate these interests by providing basic information to voters on the sponsor of a message. Adhering to these eight principles will help ensure disclaimer rules work for speakers and listeners alike.