Separation of Campaign and State 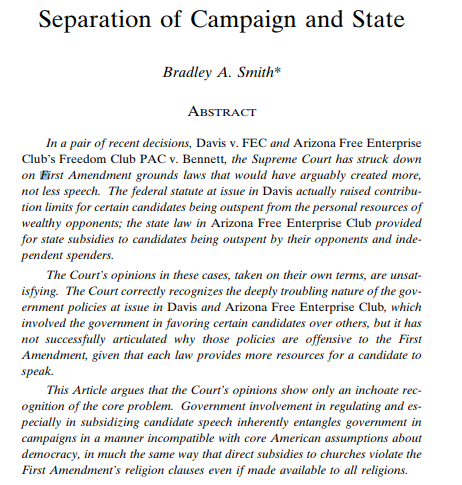 In this George Washington Law Review article, Center for Competitive Politics Chairman and Founder Bradley A. Smith assesses Roberts Court jurisprudence in campaign finance cases and argues for a “separation of campaign and state” doctrine.

As Smith explains, in a pair of recent decisions, Davis v. FEC and Arizona Free Enterprise Club’s Freedom Club PAC v. Bennett, the Supreme Court has struck down on First Amendment grounds laws that would have arguably created more, not less speech. The federal statute at issue in Davis actually raised contribution limits for certain candidates being outspent from the personal resources of wealthy opponents; the state law in Arizona Free Enterprise Club provided for state subsidies to candidates being outspent by their opponents and independent spenders.

The Court’s opinions in these cases, taken on their own terms, are unsatisfying. The Court correctly recognizes the deeply troubling nature of the government policies at issue in Davis and Arizona Free Enterprise Club, which involved the government in favoring certain candidates over others, but it has not successfully articulated why those policies are offensive to the First Amendment, given that each law provides more resources for a candidate to speak.

This Article argues that the Court’s opinions show only an inchoate recognition of the core problem. Government involvement in regulating and especially in subsidizing candidate speech inherently entangles government in campaigns in a manner incompatible with core American assumptions about democracy, in much the same way that direct subsidies to churches violate the First Amendment’s religion clauses even if made available to all religions.

The Roberts Court, however, is trapped by its refusal to challenge precedents allowing government subsidies of campaigns and wrongly confusing the government’s authority to regulate the “time, place and manner” of elections under Article I, Section 4 of the Constitution as the authority to regulate political speech and campaigns. This Article argues from history, text, and structure that Article I, Section 4 applies only to regulating such actual election mechanics as the system of election, maintenance of voter lists, and the method of casting and counting ballots, not to the regulation of political debate that precedes elections.

The Article further argues that the text of the First Amendment and the structure of the Constitution require a “separation of campaign and state,” limiting direct government regulation or subsidizing of political speech and campaigning analogous to the judicially created doctrine of “separation of church and state.” The Article concludes with a review of some of the implications of such a doctrine.

Issue Analysis No. 11: Do Out-of-State Donations Lead to Electoral Success?

This study suggests that out-of-state campaign donations are not as indicative of potential election outcomes as in-state dollars may be. Efforts to limit out-of-state ...