Understanding the Differences Between Political and Issue Advocacy 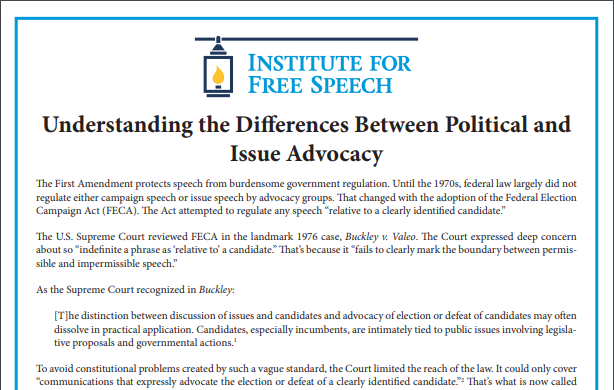 The First Amendment protects speech from burdensome government regulation. Until the 1970s, federal law largely did not regulate either campaign speech or issue speech by advocacy groups. That changed with the adoption of the Federal Election Campaign Act (FECA). The Act attempted to regulate any speech “relative to a clearly identified candidate.”

The U.S. Supreme Court reviewed FECA in the landmark 1976 case, Buckley v. Valeo. The Court expressed deep concern about so “indefinite a phrase as ‘relative to’ a candidate.” That’s because it “fails to clearly mark the boundary between permissible and impermissible speech.”

As the Supreme Court recognized in Buckley:

[T]he distinction between discussion of issues and candidates and advocacy of election or defeat of candidates may often dissolve in practical application. Candidates, especially incumbents, are intimately tied to public issues involving legislative proposals and governmental actions.[1]

To avoid constitutional problems created by such a vague standard, the Court limited the reach of the law. It could only cover “communications that expressly advocate the election or defeat of a clearly identified candidate.”[2] That’s what is now called “express advocacy.” The Supreme Court noted that “expressly advocate” would encompass only words such as “‘vote for,’ ‘elect,’ ‘support,’ . . . ‘vote against,’ ‘defeat,’ [and] ‘reject.’”[3] This became known as the Buckley “magic words” test.

In short, “Vote for Jefferson!” could be regulated. Issue advocacy like “Tell Jefferson to support lower taxes” could not.

In this way, the Court drew a line between speech that could and could not be regulated. It upheld disclosure requirements and other limited regulation of political campaign advocacy. That meant only speech that is “unambiguously campaign related.”[4]

You can tell the difference between issue advocacy and political advocacy based on the focus of the speech. Issue advocacy focuses on public policy. It can urge elected officials and candidates to support or oppose various policies. For example, an environmental group promoting a clean water bill might ask citizens to call on their senators to vote for the legislation. Or, a nonprofit promoting charter schools might ask people to urge the governor to support school choice. Groups may even criticize lawmakers for failing to support the policies they are promoting.

Over time, some policymakers grew concerned that advocacy groups were gaming the Court’s distinction. Allegedly, they were avoiding regulation by using hard-hitting issue ads to help elect candidates. Some ads pushed the line between issue and express advocacy very far. For example, many thought that “Johnson preaches family values, but took a swing at his wife” was not much different from “Reject Johnson.”

In an attempt to regulate so-called “sham issue” advocacy ads, Congress passed the Bipartisan Campaign Reform Act of 2002 (the “McCain-Feingold” law). This created the original basis for the current federal electioneering communications regime.

“Electioneering communication” is defined by McCain-Feingold to cover “any broadcast, cable, or satellite communication” that “refers to a clearly identified candidate for Federal office” and is made either within 60 days of a general election or 30 days before a primary election.[5] Issue ads that mention candidates outside these times are not regulated. The ad must also be “targeted to the relevant electorate.”[6] That, in turn, means it “can be received by 50,000 or more persons” who can vote for the candidate.[7] And reporting is only required if an organization spends over $10,000 on such ads.[8]

The Supreme Court upheld regulation of “electioneering communications” in McConnell v. Federal Election Commission and other cases that followed. In another case on McCain-Feingold, the Court somewhat relaxed the express advocacy standard. Speech that was the “functional equivalent” to express advocacy was also covered.

Any deviation from the federal standards for express advocacy or “electioneering communications” is constitutionally suspect. To pass Court review, the government would presumably need to show strong evidence that a new law regulated genuine campaign speech.

The federal reporting requirements for electioneering communications are clear. The group making the expenditure must report the amount spent on each ad and the candidate named in each ad.[9] Donors who gave over $1,000 “for the purpose of furthering” the electioneering communication must be reported.[10] The Federal Election Commission interprets that to mean contributions earmarked for these ads. This interpretation was recently upheld by the United States Court of Appeals for the District of Columbia Circuit.[11]

Thus, today the federal definition of political advocacy subject to government reporting requirements is express advocacy (or its functional equivalent) and “electioneering communications.” Otherwise, issue speech is protected from disclosure and regulation.

First National Bank of Boston v. Bellotti: Protecting the Right to Hear Others

Can the government silence speech about an election simply because the speaker is a corporation? Can it deny voters the opportunity to hear a ...

Of the several policy proposals circulating Capitol Hill to correct lobbying abuses, strengthen the relative voice of citizens, and add accountability to the earmarking process, one ...