Amy Klobuchar Knows Exactly What She’s Doing, and It Should Scare You 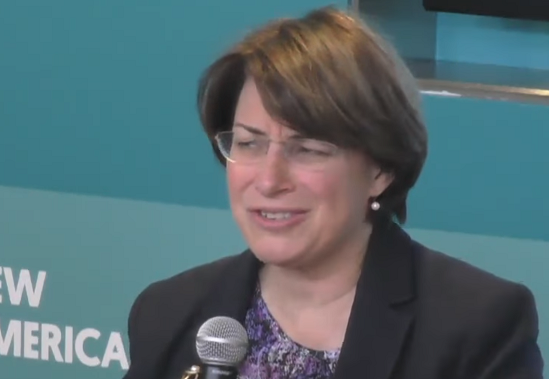 We have written extensively before about the dangers of the so-called “Honest Ads Act,” a bill introduced late last year by Senators Amy Klobuchar (D-MN), Mark Warner (D-VA), and John McCain (R-AZ). Purported to be legislation intended to stymie Russian efforts to influence our elections, the bill would actually regulate and restrict online internet ads by Americans. The bill would make it harder to criticize politicians, advocate for or against legislation, and engage an online audience about the pertinent political issues of the day.

But what we at IFS see as problems with the law, Sen. Klobuchar sees as features.

Speaking to a friendly audience at the aptly-titled “Who’s Afraid of Online Speech?” event (hosted by New America and Slate), Klobuchar made clear what she sees as the real threat to “the state of our democracy” – Americans buying online issue ads without government permission. In Klobuchar’s mind, TV ads are already highly regulated “if they’re about anything, about reproductive rights, about energy,” so there’s “no reason” we can’t pile those regulations onto all online ads as well.

There are, of course, many good reasons not to do so. For one, the Honest Ads Act goes far beyond just creating a public file a la TV stations. For another, internet ads are fundamentally different from television ads and shouldn’t be regulated in the same way. Low cost internet campaigns are a hallmark of grassroots activism in the modern era. Forcing those activists to comply with a complicated series of new regulations, and in so doing opening themselves up to legal liability and potential harassment, can only have the effect of reducing that speech. That’s what the Honest Ads Act would do.

But Klobuchar seems to welcome this inevitable outcome. She made hay of the $100,000 in ads that were purchased on Facebook during the 2016 election using rubles, but what she also made abundantly clear in her talk is that what she’s really concerned about is the $1.2 billion in online ad spending –  which means Klobuchar recognizes that 99.99% of what her bill regulates is speech by Americans.

She stated this directly. The Honest Ads Act is “important not just because of Russia,” Klobuchar suggested, “but because of all of the shenanigans that go on in campaigns that you want to be able to police.” Which begs the question, who is the police officer dealing with these “shenanigans” that take the form of online issue speech? It’s Klobuchar and her pro-regulatory friends.

Klobuchar further acknowledged that there’s “a lot of stuff going on that wouldn’t be covered [by the Honest Ads Act], the bots, the trolls” promoting “fake news.” As she sees it, that issue will take care of itself. Klobuchar relayed a story of vacationing in Ukraine with fellow Senators John McCain and Lindsey Graham and “hearing stories of how their citizens have learned over time what this fake news is… and I think that’s actually going to start happening in America.” For all the bluster about how Honest Ads is going to fight back against Russian propaganda, Klobuchar doesn’t really think that’s a problem. She thinks Americans can accurately judge truthful messages from fake ones.

No, the real problem, to Klobuchar, is that someone might post a pro-life ad (or pro-gun control ad, for that matter) on the internet without filing cumbersome paperwork. That might encourage those who see that ad to call their politicians to ask about a recent vote. That, in turn, might force the politician to have to justify their vote. It might make their campaign harder, it might make them soften their position, or it might make them lose votes.

What Klobuchar sees as the real threat is not Russian propaganda, but American civic engagement.

Perhaps most insidious of all, Klobuchar knows her bill won’t pass. “The chances of the bill passing are small,” she said, “but the more you push on it, maybe it gets the FEC to act … If we hadn’t pushed, we wouldn’t even have some of the voluntary actions [from online companies] that we’re seeing now.” Klobuchar, for all her talk about fairness and democracy, is more than happy to get her way through extra-democratic means. She wants to use her bully pulpit to force a regulatory agency to impose new restrictions that won’t get through Congress. She wants the threat of regulation to cow internet companies to “voluntarily” enact the same policies that are in her bill.

Of course, it’s not surprising that a politician would pursue their policy goals by any means necessary, but it smacks of utter hypocrisy to do so in the name of protecting democratic institutions.

I will give credit to Sen. Klobuchar for lucidly stating her true position. She is afraid of your online speech, and she thinks she has a bill that can stop it.

I’m afraid of that.

Foresight is 20/20: Free Speech Developments to Follow This Year

A number of trends that will continue to unfold in 2020 have the potential to significantly impact Americans’ political speech rights. As policymakers, pundits, ...