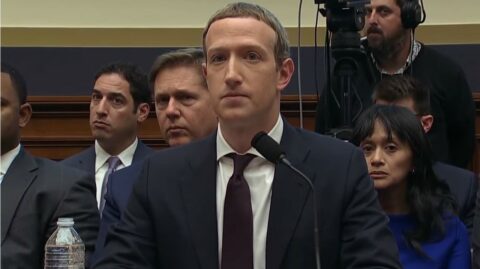 The new year has begun with renewed calls by lawmakers and media pundits to ramp up regulation of Big Tech, a move which Facebook CEO Mark Zuckerberg has welcomed. What these folks seem to forget is that Facebook has the least reason of all to fear increased government regulation in the tech industry. It has 2.7 billion users, raked in $85.9 billion in revenue in 2020 alone, and has already proven its ability to overcome even unprecedented financial penalties.

Now, Facebook is aiming to get its foot in the door with the Biden administration by increasing its efforts to police speech on its platform while expressing support for government regulation of social media. Its wish list of new laws stretch from reconstructing its own liability protections to increasing online political ad regulation. If it sounds too good to be true that Facebook is volunteering to shoulder the cost of placing greater controls on online speech, it probably is.

Facebook and Zuckerberg have hinted at, or explicitly asked for, greater government regulation of online content on more than one occasion. In particular, they have also voiced support for additional regulations on online political advertising. Their approach is the same in both contexts: promote complex regulatory mechanisms that only large, established companies like Facebook can navigate. These appeals have the added effect of deflecting responsibility for handling controversial speech and political advertisements onto the government.

Facebook has its own rules on political advertising, but Zuckerberg has explained that “[Facebook’s] systems would be more effective if regulation created common standards for verifying political actors.” The new Congress has begun with another attempt to do just that (and more) with the reintroduction of H.R. 1 and S. 1. One section of the massive bill, known misleadingly as the “Honest Ads Act,” would make online political advertising cumbersome and costly for tech companies, ad buyers, and speakers.

The bill would regulate internet speech more stringently than even the most expensive television and radio ads. As the Institute noted in its 2017 analysis of the bill, online ads that name candidates would be classified as “electioneering communications” – even if they never appear in the candidate’s district or state. If an online issue ad in my home state of Indiana, for example, called on Hoosiers to reach out to House Speaker Nancy Pelosi from California and request quicker COVID relief, it would be dubbed an electioneering communication, despite Hoosiers’ inability to vote for or against the California Congresswoman. Advertisements of this sort clearly should not be within the purview of campaign finance law and would serve only to thwart political speech and advocacy.

Moreover, the bill would impose rigid disclaimer and disclosure requirements that would render smaller, more cost-effective methods of online advertising impractical. Many online ads take up only a few inches of space or a few seconds of time. Consequently, they require a short, flexible disclaimer. As we’ve explained in our analysis, H.R. 1 and S. 1 proponents would rather see these (and other) new forms of advertising die off than accommodate changes in technology to bring politics into the 21st Century. The bill would also force websites to warehouse data about political ad buyers in public files, which would include the ad buyer’s name, address, a slew of minutiae about the ad’s cost and viewership, and much more, including a copy of the ad. Maintaining these databases would be costly for any website seeking to host political advertisements. The end result is that many online outlets may decide it’s easier to prohibit political ads altogether than try (and fail) to comply with the law.

For a preview of the havoc this sort of regulation can wreak, we need only look to similar proposals in the states. In Washington, legislation inspired by the Honest Ads Act was so confusing, it resulted in powerful, incredibly well-resourced companies like Google and Facebook ditching political advertising in that state altogether. If those companies couldn’t comply, who could? Startups and smaller competitors need not even try.

If Facebook’s call for increased internet regulation is answered, hardly anything could sweeten the deal – besides helping to shape it. That happened in Maryland, where Facebook praised the state’s 2018 law regulating online ads as a “national model.” Courts had another description for it: unconstitutional. The Washington Post, The Baltimore Sun, and other area news outlets successfully sued the state for violating their First Amendment rights, illustrating the risks of an aggressive crackdown on online speech. Meanwhile, Google was still unable to comply with Maryland’s law and stayed political advertising in the state, pending the lawsuit’s outcome.

It is in Facebook’s best interest to woo federal lawmakers into offering them a seat at the table where similar regulations are being developed, so they can shape the proposal to their liking and gain greater insight into how the law will work. Companies that aren’t afforded the same opportunity – even a giant like Google – will be put at a clear disadvantage.

Facebook’s advocacy for legislation it can profit from is nothing new. Europe’s General Data Protection Regulation (GDPR), created in 2018, has boosted advertisers’ faith in Facebook and Google while damaging smaller competitors. The regulation imposed new privacy requirements as well as data storage and processing conditions which, if not met, can result in fines of up to 4% of a company’s global revenue. Advertisers quickly realized smaller companies were not up to the task and started sending all of their ad dollars to Facebook and Google.

And guess what: “New privacy regulation in the United States and around the world should build on the protections GDPR provides,” Zuckerberg wrote in The Washington Post in 2019. He even supports “imposing sanctions” on companies for their mistakes. But those sanctions, like the regulations Facebook has supported on online advertising and other topics core to its business, would not be designed with new tech startups in mind. They would be tailored to companies like Facebook and Google, who Congress falsely assumes to be representative of the entire internet.

Major companies are sure to continue lobbying for regulations like these that pulverize their competition while getting Big Tech back in Congress’s good graces. Drowning internet companies in heavy-handed regulation will only lead to less speech and fewer alternatives, as internet behemoths like Facebook will be the only ones who can remain afloat. It’s important to have faith in the new year, but maybe don’t place too much on Facebook’s kindheartedness.

The Netflix documentary, The Social Dilemma, is making waves. The main takeaway is that tech companies are stealthily controlling us by using sneaky product ...