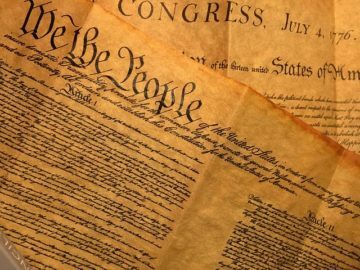 Today marks the 233rd anniversary of the signing of the U.S. Constitution. As we commemorate September 17, 1787 as the end of the drafting process, we should also remember it as the beginning of a passionate public debate over ratification – and an evergreen reminder of the importance of anonymous speech.

As Federalists and Anti-Federalists sought support for their views, they persuaded fellow Americans by anonymously circulating their arguments in the press. Ten days after the Constitution was signed, the first anti-Federalist letter was published, followed by Federalist No. 1 a month later. Authored under the pen names “Cato” and “Publius,” respectively, these seminal essays are among many in our nation’s history written pseudonymously.

A decade prior, Common Sense’s rousing words urged the country to pursue independence. It was written “By an Englishman,” only revealed to be Thomas Paine months after becoming a sensation.

In today’s world, anonymous advocacy is often maligned and misunderstood. It’s surprising, considering how many Americans fear personal and professional backlash for their political views. A July Cato Institute poll shows nearly a third (32%) of employed Americans are worried about missing career opportunities or losing their job if their political opinions became known. The same poll shows that over 62% of Americans have political views they are afraid to share.

As Cato points out, this is especially notable because a vast number of campaign contributions are public knowledge and can easily be found online. Under federal law, donors who give as little as $200 (and one cent) to candidates or political parties must publicly report personal information – including their name, address, occupation, and employer – to the government, making them easy targets for intimidation and harassment.

In his concurring opinion in Citizens United, Justice Clarence Thomas wrote, “I cannot endorse a view of the First Amendment that subjects citizens of this Nation to death threats, ruined careers, damaged or defaced property, or pre-emptive and threatening warning letters as the price for engaging in ‘core political speech, the primary object of First Amendment protection.’”

We agree. Raising disclosure thresholds would protect more Americans from this kind of backlash.

Disclosure isn’t only weaponized against small donors; unfortunately, it also chills the speech of small groups. In Coalition for Secular Government (CSG) v. Williams, a two-person group that planned to raise less than $3,500 to update and distribute a public policy paper online was forced to register and report to the state of Colorado because their paper included one line opposing a ballot measure. The Institute for Free Speech took the case to defend the group’s First Amendment rights. Thankfully, a federal district court recognized the severe burden such disclosure requirements pose to citizens speaking about government.

Explaining the decision, Senior District Judge John Kane wrote that “the internet is the new soapbox; it is the new town square. CSG’s ‘personhood’ paper is Tom Paine’s pamphlet. It is the quintessence of political speech.”

This Constitution Day, let’s remember the value of anonymous speech in the public square. It was vital to our founders, and it’s just as vital to Americans 233 years later.

In Americans for Prosperity Foundation, the district court made factual findings that leaks were commonplace and the State’s security protocols for maintaining the confidentiality ...