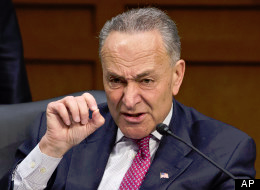 Those who seek ever more regulation of political speech love to play hopscotch with government agencies. If the FEC won’t take up your cause, try the IRS. If the IRS isn’t buying it, head to the FCC. FCC isn’t interested? Maybe you can convince DOJ to take action. “Reformers” don’t seem to care what the regulation is, as long as some bureaucrat somewhere is making it harder to spend money on political speech.

The latest jump has landed on the SEC. Democrats are unhappy that the agency is not drafting more mandatory reporting requirements for companies that make “political contributions.” Of course, political contribution, in this context, is a misnomer: corporate donations to Super PACs are already fully disclosed (and a rarity), and companies remain prohibited from giving to candidates and political parties.

But no regulation is ever sufficient for “reformers,” so Democrats in Congress are seeking an even wider net of forced disclosure, encompassing donations by businesses to nonprofits, unions, and trade associations. They are angry that the SEC recognizes such new rules would be unnecessary, counterproductive, and highly vulnerable to legal challenge. From The Hill:

Mary Jo White, the chairwoman of the Securities and Exchange Commission, was repeatedly attacked Tuesday by Democrats on the Senate Banking Committee.

Sen. Charles Schumer (D-N.Y.) went so far as to suggest that White contributed to the political environment that enabled the rise of presumptive Republican presidential nominee Donald Trump as he excoriated her for refusing to consider rules that would require public companies to disclose any political spending.

“You want to know why people are so discontent? It’s in part because of a few powerful people who send out a cascade of ads,” he said. “You frankly are aiding and abetting it at the SEC.”

“You are hurting America,” he added.

Let’s unpack Sen. Schumer’s statement a bit. First, I think it’s safe to say that the vast majority of Americans do not care if the SEC forces Apple to report how much money it gave to the Sierra Club last year. Rather, like most politicians, Sen. Schumer and his allies are the ones that care. If company X gives money to the New York Chamber of Commerce, and the State Chamber runs ads saying Chuck Schumer’s vote on bill Y hurt the New York economy, then Sen. Schumer can use his considerable political power to hurt the bottom line of company X and dissuade them from criticizing his voting record in the future. But should the SEC be helping politicians engage in retaliatory political attacks?

Of course not. The purpose of the SEC is to protect investors, maintain fair and orderly markets, and facilitate capital formation. Regulating political speech is the last thing it should do.

Second, even if you think these rules are a good idea, yelling at Mary Jo White and accusing her of “hurting America” seems ineffective and borderline offensive. White is following the law passed by Congress. As we have written before, the 2015 Omnibus spending bill prohibited the SEC from issuing new regulations on exactly this topic during Fiscal Year 2016. Sen. Schumer should save his criticism for those who actually voted to pass that law – among them Sen. Chuck Schumer.

Democrats convolutedly argue that the SEC should, despite the law, write the regulations even though they cannot legally take effect, but, even if the agency was legally allowed to do that (it is not), appropriating SEC resources to write regulations that will sit on a shelf and collect dust is an obvious waste of time and money and counter to the Commission’s actual duties.

Finally, and perhaps most interestingly, Schumer seems to reveal what this hullaballoo is really about – political speech. It is not the money that, in Schumer’s mind, is causing Americans to be unhappy and “discontent” – it’s the “cascade of ads.” That is, Sen. Schumer doesn’t like people hearing political messages so frequently, and by god, for the good of the country, he is determined to put a stop to it! If only we could ban all of these political ads, then we can have the criticism-free government that Schumer desires. And new SEC disclosure rules are a step down that speech-limiting path.

“Reformers” regularly argue that disclosure has nothing to do with free speech, and that more disclosure does not limit anyone from speaking out. But Sen. Schumer understands quite well that the deterrent effect of disclosure regulations should not be underestimated. If you force more groups to report the private information of their supporters to the government, particularly in areas only loosely connected to actual campaigns, you can dissuade Americans from contributing to such groups, limit ads on topical political issues, and thereby silence political speech.

Less political speech might be good for Sen. Schumer, but for the rest of us who want to be able to voice our “discontent,” it is not.

At its core, the debate about political disclosure is actually pretty simple. The information provided about donors to the government has the benefit of ...