Fact Check: Would H.R. 1 and S. 1 Give Taxpayer Money to Politicians? Yes. 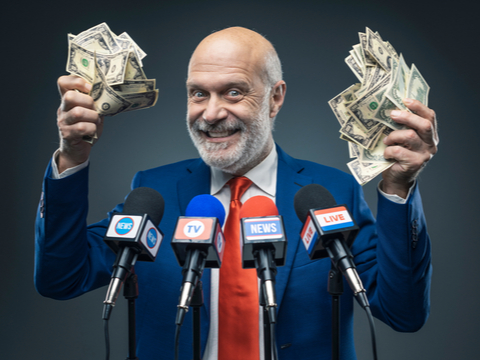 It’s undisputed that H.R. 1 and its companion legislation, S. 1, would take public money and give it to politicians’ campaigns. Under the Democrats’ plan, participating candidates would receive a 600% match from the government for donations up to $200. That means a $200 donation quickly becomes $1,400, compliments of government largesse. In the weeks leading up to a general election, candidates would be eligible for additional government funding, up to $500,000 per House candidate in H.R. 1 and $150,000 per Congressional District in the state in which the Senate candidate is running in S. 1. These subsidies would cost billions each election cycle, with each candidate potentially receiving millions from the government. Many of the above provisions are indexed to inflation, so program costs will likely rise over time as well.

The objections of First Amendment supporters, if taxpayer funds are used, should be obvious. Taking money away from citizens to fund the campaigns of candidates with whom they may disagree is inherently objectionable. That’s especially true when such funds are required to be distributed to candidates that may run offensive campaigns or hold bigoted views.

Perhaps in light of the above concerns, supporters of the scheme and some members of the media claim that these funds do not belong to taxpayers:

Many other media outlets adopt the rhetoric of activists who support the bill and avoid descriptions of the program as forcing taxpayers to fund campaigns. The New York Times carefully avoided the word “taxpayer” when it described the money as “raised through fines on corporate lawbreakers and tax cheats.” Even Fox News seemed to reject the claim that the legislation relies on taxpayer dollars. When Rep. August Pfluger (R-Texas) shared his concerns about H.R. 1, remarking, “I’m particularly disturbed by the fact that if this bill passes, taxpayer dollars will be directly funneled to congressional candidates and campaigns,” the outlet countered that “the legislation doesn’t authorize new general taxpayer dollars,” but instead relies on corporate penalties.

IFS Founder and former FEC Chair Bradley A. Smith recently shared his thoughts on the matter:

“Democrats have concluded Americans are stupid. Their massive election takeover bill, HR1/S1, says ‘no taxpayer funds’ will fund political campaigns. Anyone [who] says otherwise, they yell, is ‘lying.’ Then the bill commits millions in taxpayer $$ to campaigns.

“Oh, [S. 1] has a fancy-schmancy dedicated financing stream based on surcharges on fees paid by corporate wrongdoers so that its sponsors can say, ‘There is no taxpayer funding!’ but we all know money is fungible. If it weren’t for the need to fund political campaigns, the money from this dedicated stream would go to fund other taxpayer obligations, so let’s just drop the pretense, shall we?”

Say what you will about the bill’s sponsors, but they know the power of words. It’s why they deceptively named their legislation the “For the People Act” when, in reality, it should be called the “For the Politicians Act.” It’s why they frame H.R. 1 and S. 1 as important “voting rights” bills, completely glossing over the massive abuses to free speech. And it’s why they don’t want you to say that their scheme uses “taxpayer funds.”

Recent polling by McLaughlin & Associates shows just how opposed the public is to taxpayer-financed political campaigns. In West Virginia, 87% of respondents oppose a New York City-style campaign finance system (which is what H.R. 1 and S. 1 propose). In Montana, 81% of respondents oppose the scheme, and in Arizona, it’s 77%.

No matter how you word it, it’s as clear as day: The “public funds” from H.R. 1 and S. 1 may originate from corporate penalties, but they belong to taxpayers. The overwhelming majority of Americans oppose squandering them on partisan political campaigns.

The Federalist Society is hosting ...

The Connection between Tax Financing of Political Campaigns and Free Speech

Taxpayer-financing of political campaigns is an increasingly salient issue at the state and local level. Advocates of greater campaign finance regulation argue such policies ...