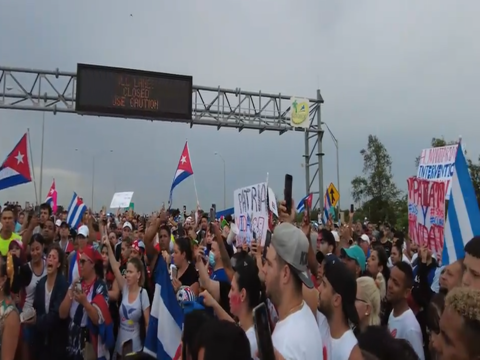 The right to peacefully assemble and protest is a cornerstone of our constitutional government. It is imperative that government officials respect this right regardless of who is exercising it. However, recent events in California and Florida highlight how easily vague or flimsy security concerns can be invoked to limit assembly rights.

In California, the City of Anaheim recently canceled an “America First” rally that was set to be headlined by Reps. Matt Gaetz and Marjorie Taylor Greene. The city stated that the rally was canceled because of “public safety concerns,” but added in a tweet, “[a]s a city we respect free speech but also have a duty to call out speech that does not reflect our city and its values.” This statement suggests that political disagreement may have influenced the decision by city officials to cancel the event. Viewpoint discrimination of this nature is a disgrace to the First Amendment.

The problem doesn’t end there. If security concerns were an issue, the city did not respond effectively to them. The city’s statements did not explain what it would do to ensure the rally could be hosted safely in the future. If safety concerns can permanently cancel an event or subject events to extreme delays, then those who threaten the safety of others would have a heckler’s veto over speakers they wish to silence. Even if the viewpoints expressed by those hosting the rally did not influence the city’s decision, its failure to stand up to or guard against alleged threats is troubling for First Amendment rights in its own way.

Security concerns have also played a central role in the passage of anti-riot legislation across the country. As IFS Communications Fellow Nathan Maxwell has noted, many of these bills are concerning because their broad reach could harm protest rights. For instance, Florida’s anti-riot law allows criminal charges to be brought against a peaceful protester if people around the individual cause violence. We should always be wary when governments pass laws in the name of security that endanger protected First Amendment activities. After all, the United States government has historically cracked down on First Amendment liberties the most in times of perceived crisis.

As with the city of Anaheim’s invocation of security concerns to cancel the planned “America First” rally, there is also concern that the Florida anti-riot law could be selectively enforced against proponents of political viewpoints that state officials dislike. Some allege that’s already happening. Consider Florida Governor Ron DeSantis’ diverging responses to the Black Lives Matter protests and the Free Cuba protests.

“All of a sudden you have people out there shutting down a highway. They start to do that, there needs to be swift penalties.”

“I think people understand the difference between going out and peacefully assembling, which is obviously people’s [sic] constitutional right.”

In fact, after Free Cuba protesters blocked the Palmetto Expressway, in violation of Florida’s new anti-riot law, none of those individuals were cited or charged. If Florida’s law imposing heavy punishments on protesters who block roadways is a good one – if “there needs to be swift penalties” when “you have people out there shutting down a highway” – then public officials should have been readily willing to enforce the law against the Free Cuba protesters. But the officials were not. This is either a tacit acknowledgement that the law as written goes too far in limiting the ability of groups to assemble, or it means that Florida officials did not want to apply the law against groups expressing a viewpoint they favor. Either explanation is deeply troubling for First Amendment rights.

Lawmakers may pass laws limiting security concerns, such as people blocking a highway. However, the government is not allowed to enforce laws selectively to privilege certain viewpoints. For instance, the government’s power to tax organizations would not permit it to tax pro-choice or pro-life organizations more than other groups because of their political beliefs. We have a responsibility to ensure that all Americans’ civil liberties are equally protected.

Public officials need to stand up for the First Amendment and offer both security and adequate opportunities for assembly so that Americans are able to participate in and maintain our democratic project. The government has the power and responsibility to protect citizens from real security threats. But officials must also respect civil liberties and uphold them equally, regardless of one’s political views. When murky security concerns are used to limit constitutionally protected assembly rights, it is a threat to both our liberty and our safety.

Judge Amy Coney Barrett has participated in few cases with First Amendment-related claims as a Seventh Circuit judge. One recent case, however, sheds some ...

The esteemed executives enshrined on Mount Rushmore are keeping watch over a more speech-friendly state following our challenge to South Dakota’s unconstitutional restrictions on ...