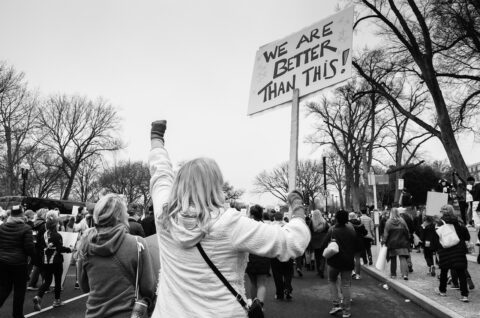 Numerous state legislatures this year considered, or are considering, legislation that would threaten the right of citizens to peaceably assemble. The bills are problematic in that they open the door for innocent protesters to be lumped in as attendees of a “riot,” as narrowly defined, if found in the wrong place at the wrong time. That would chill protest activity, as speakers fearful of criminal charges would self-silence. While different states’ bills contain their own peculiarities, they are all largely founded on the same mistaken belief: that it is permissible to combat unacceptable acts of violence and destruction with aggressive measures that threaten First Amendment-protected protests.

The most prominent of these bills was recently signed into law in Florida via H.B. 1. That measure stemmed from an effort by Gov. Ron DeSantis and legislative leaders to crack down on protest activity following last summer’s Black Lives Matter protests spurred by the killing of George Floyd. The law makes it a felony to participate in a riot, but it defines a riot as an assembly involving three or more people where the intent is “to assist each other in violent and disorderly conduct,” or where there is an “imminent danger of injury to another person or damage to property.” Under this broad standard, a person with no interest in rioting or causing destruction could find him or herself punished for others’ crime.

The American Civil Liberties Union of Florida has noted that the law could harm peaceful activists exercising their First Amendment rights. H.B. 1 “would subject any person present at any gathering that became violent through no fault of their own to felony charges, potentially leading up to five years in prison and the loss of their voting rights, even if the individual did not engage in any violent and disorderly conduct, among other provisions,” the group wrote.

While Gov. DeSantis has celebrated the law as “anti-rioting” and “pro-law enforcement,” the effects are seemingly much broader. A peaceful protester inadvertently found at a gathering that turns disorderly could not only face criminal charges, but also would be powerless to contest violent retaliatory measures of counter-protesters. The danger is, at minimum, an obvious disincentive to protest. Micah Kubic, Executive Director of the ACLU of Florida, disparaged the law as “a blatant attempt to silence and criminalize speech that runs counter to the political agendas of those currently in power in Florida.” If the First Amendment is clear about anything, it’s that citizens have the right to freely and openly criticize their government. Florida’s anti-riot law puts a chill on this fundamental liberty.

Unfortunately, the Florida law is no anomaly. Various state legislatures across the country have considered similarly egregious bills this session. In Oklahoma, the Legislature passed and Gov. Kevin Stitt signed a law stiffening penalties against demonstrators and providing immunity to fleeing motorists who harm or kill protesters. Other bills continue their march through the legislative process, like Alabama’s H.B. 445, which awaits Senate Committee consideration after passing the House in March. In similar fashion to the problematic Florida bill, the Alabama iteration would define a riot as an assembly of “five or more persons resulting in conduct which creates an immediate danger” of property damage or bodily injury.

Other state responses to last summer’s events have narrowly escaped full consideration in the 2021 session, like Kentucky’s S.B. 211, which would have made it a misdemeanor to “accost, insult, taunt, or challenge a law enforcement officer,” among other speech-restrictive provisions. Thankfully, the Kentucky General Assembly adjourned before the Senate-passed bill could be considered by the House. For now, protesters in Kentucky can continue demonstrating against police procedure without legal pressure to mince their words.

Additional anti-riot bills proposed in Georgia, Indiana, Nevada, and elsewhere illustrate a concerning trend among state lawmakers. While there is a strong government interest in preventing violent public gatherings, it is crucial to avoid discouraging legitimate First Amendment-protected protest activity in the process. Although multiple bills – like those in Georgia, Indiana, and Nevada – did not become law this session, there is still much to fear going forward.

American citizens have and will always retain the First Amendment right to protest. Gathering to express collective dissatisfaction with the government should never carry the risk of being criminally charged for actions taken by others in a crowd. The broad language in laws like Florida’s threaten innocent protesters and could transform the standard of “innocent until proven guilty” into “innocent until proven in the vicinity.” All legislative efforts aimed at thwarting riots and destructive activity must be handled with abundant caution to avoid spillover onto peaceful demonstrators.