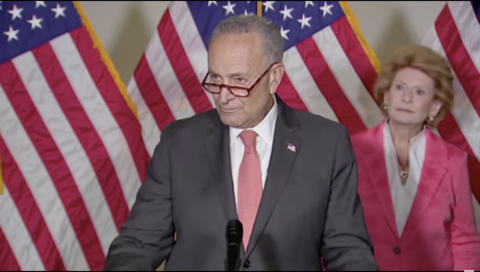 Senate Majority Leader Chuck Schumer (D-N.Y.) recently told reporters that the Senate will vote in late June on Democrats’ sprawling bill package that will radically upend current rules and regulations governing speech about public affairs. Known as H.R. 1 in the House and S. 1 in the Senate, the bill is a direct assault on free speech, devoting about 300 pages to suppressing citizens’ ability to criticize government by – among other radical provisions – exposing civically engaged Americans to harassment and intimidation for their beliefs.

Thankfully, a large, diverse coalition has been speaking out about these threats to free speech. Groups positioned along the political spectrum, including the American Civil Liberties Union, National Right to Life, the U.S. Chamber of Commerce, and over 130 nonprofits oppose the bills’ anti-speech measures. Along with a wide range of elected officials and media outlets, these groups are sounding the alarm on the dangerous legislation.

Kate Ruane and Sonia Gill, two senior legislative counsels at the ACLU, penned a salient op-ed in The Washington Post in early March, warning that H.R. 1 “contains significant flaws that are detrimental to the health of our democracy.” Addressing provisions that would require public exposure of the names and addresses of Americans who support nonprofits and social causes, the writers note the measure threatens speech about public issues that ACLU supporters care about, such as immigrants’ rights, voting rights, and reproductive freedom. Ruane and Gill warn that the bill “will likely have unintended consequences on the political rights of noncitizen immigrants as well as many nonprofits, including civil rights organizations and other civil liberties movement builders.” Published prior to the vote in the House, the ACLU op-ed urged members of Congress to fix these problems prior to passage. The House did not heed their warning.

Those provisions of the bill threatening causes and the Americans who support them have also been criticized by conservative groups. For example, pro-life groups like National Right to Life, March for Life Action, and Pro-Life Utah signed a coalition letter authored by People United for Privacy opposing H.R. 1 and S. 1. for infringing on Americans’ privacy and associational rights. As Dale Bartscher, Executive Director of South Dakota Right to Life, wrote for the Rapid City Journal: “Free speech and privacy are American values.”

The significance of donor privacy was echoed by Rev. Dean Nelson, Chairman of the Frederick Douglass Foundation, and Phillip E. Thompson, President of the Loudoun County branch of the NAACP, in a compelling piece published by InsideSources. Nelson and Thompson focused on the landmark Supreme Court decision of the civil rights era, NAACP v. Alabama, noting that while the circumstances differ greatly from today’s times, a chilling effect on free speech is still at stake. They emphasize how this could hurt supporters of causes like Black Lives Matter and warn more generally:

“[T]he sweeping provisions included in HR 1 would greatly grow the pool of those at risk for retribution to include anyone who prefers to advocate for issues about which they are passionate on an anonymous basis.”

In a powerful appeal to the left, Sarah Ruger of Stand Together asks, had H.R. 1 been law, would marriage equality ever have been achieved, or would it have been prevented by donor harassment? The Philanthropy Roundtable’s Executive Senior Fellow, Howard Husock, points out that the bill would also harm donors to Planned Parenthood.

Elsewhere, conservatives noted that the threats in the bill are not only a concern for controversial causes. In the Anchorage Daily News, former Alaska Lieutenant Governor Mead Treadwell explains:

“Americans have a First Amendment right to privately support charities and civic groups, including through membership. Doing so should not ‘brand’ someone as fully supporting everything that group does or advocates. A garden or gun club, an aviators group, or a snowmachine group might have views on parklands or air traffic control or access to public lands. Why should they have to release their membership to make their feelings known on legislative issues?”

The editors of National Review spotlight the bill’s ridiculous disclosure rules, which “would require donors to, say, the AARP to be identified as supporters of any candidate if the AARP demands that the candidate keep a promise to protect Social Security. The cumulative effect is to further burden citizen rights to petition and further insulate the government from criticism.” (Institute for Free Speech Research Intern Margaux Granath also wrote about the many problems with that policy on our blog.)

Adam Sullivan of The Gazette in Cedar Rapids, Iowa highlights how the provision could be unfair to donors of some organizations that have a multifaceted mission. For example, he says a donor supporting the ACLU’s LGBTQ advocacy might be wary of their name being associated with certain religious liberty projects. Matthew Yglesias, formerly of Vox, writes in his newsletter, Slow Boring, that while he is “not as invested as the ACLU in the sanctity of donor anonymity… [he is] not really sure what [donor exposure is] solving.” Walter Olson, Senior Fellow at the Cato Institute, points to the donor exposure mandate as one the many reasons it’s preposterous to call H.R. 1 a mere “voting rights bill.”

Donor exposure mandates don’t hurt one type of person or issue – they hurt Americans of every stripe, including those who join together in groups. In their Washington Post op-ed, the ACLU attorneys emphasized the importance of “privacy protections to be able to speak freely and without fear of reprisal,” specifically for groups “advocating policy changes outside the mainstream.” On the other hand, groups like the U.S. Chamber of Commerce, who represent more mainstream interests, are also against these provisions. In an April letter to members of the U.S. Senate highlighting S. 1’s donor exposure mandates, among other issues, the Chamber’s Senior Vice President, Jack Howard, wrote:

“The Chamber believes it is crucial to democracy to bring more people into the political process. Significant portions of S. 1 are clearly intended to have precisely the opposite effect – pushing certain voices, representing large segments of the electorate and U.S. economy, out of the political process altogether.”

Ultimately, former FEC Chair Bradley A. Smith and IFS President David Keating explain that the inevitable consequence of H.R. 1 and S. 1 is less speech. They write in the New York Daily News:

“H.R. 1 would force even nonprofits to publicly expose their donors, allowing politicians and their allies to build enemies lists of Americans who support causes they dislike. When Senate Democratic leader Chuck Schumer first spoke about these provisions years ago, he bragged, ‘it’s good to have a deterrent effect.’

The result will be as predictable as it is unacceptable. Americans who are exposed would become new victims of cancel culture. They will be harassed for their beliefs, boycotted at their work, blacklisted and bullied into silence. Groups that fear for their supporters’ safety will have little choice but to self-censor.”

This is not the future Americans want or deserve. Let’s hope Senators quickly realize their mistake before even one voice is silenced.

For further reading, the Institute for Free Speech tracks notable commentary about the free speech issues related to this draconian bill (and other topics of interest) in our H.R. 1 and S. 1 Resource Guide and in our Daily Media Update.

While some may have faith in disclosure laws’ ability to pinpoint instances of favoritism, despite the lack of evidence that such laws improve perceptions ...