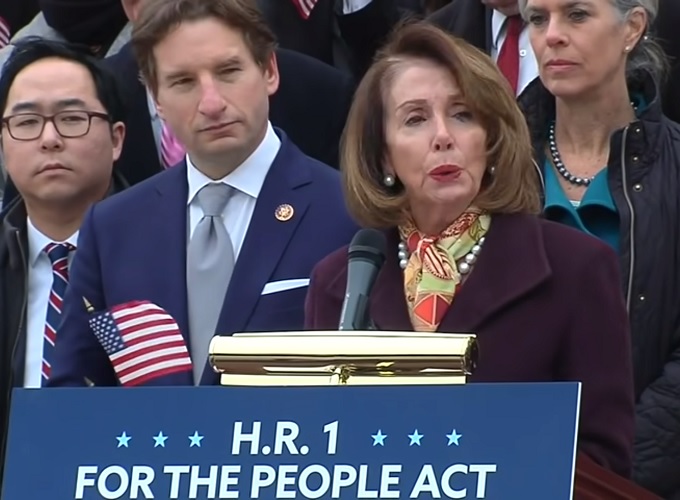 The Institute for Free Speech[1] strongly opposes H.R. 1, the Orwellian “For the People Act.” More appropriately known as the “For the Politicians Act,” this radical bill would, in fact, greatly harm the ability of the people to freely speak, publish, organize into groups, and petition their elected representatives in pursuit of a better government.[2]

In particular, H.R. 1 would impose onerous and unworkable standards on the ability of Americans and groups of Americans to discuss the policy issues of the day with elected officials and the public. Certain sections of the bill would violate the privacy of advocacy groups and their supporters, limit political speech on the internet, and compel speakers to recite lengthy government-mandated messages identifying some of their supporters by name in their communications.

Importantly, these restrictions would reach far beyond campaign speech to regulate discussion of legislative issues and public affairs. For advocacy groups, unions, and trade associations, several of the limits proposed in H.R. 1 would operate as a total ban on speech.[3]

If signed into law, all of these provisions would be interpreted and enforced by a newly partisan Federal Election Commission. Under H.R. 1, the Commission would be radically transformed from its historic and deliberately bipartisan structure to one under partisan control of the president. As nine former members of the Federal Election Commission with a combined 60 plus years of service warned in a recent letter to Congress, the likely impact would be to shrink public confidence in the impartial enforcement of campaign finance laws, weaponize these regulations for partisan gain, and silence much political speech through new rules on groups that speak about public affairs.[4]

H.R. 1 would also force Americans to pay for speech they oppose. This new financing system is a riverboat gamble on an untested – and costly – scheme that would have many unforeseen effects. Existing research has proven that similar schemes elsewhere have failed to achieve proponents’ stated goals.[5] Instead, the program will likely incentivize – and subsidize – candidates with hateful messages, create new avenues for corruption, increase polarization, give government greater control over campaigns, waste tax dollars, and fail markedly at improving the quality of governance or the diversity of those who are elected to higher office.[6]

At its core, H.R. 1 would greatly increase the already high legal and administrative compliance costs, liability risk, and costs to donor and associational privacy for civic groups that speak about policy issues. Organizations will be further deterred from speaking or will have to divert additional resources away from their advocacy activities to pay for compliance staff and lawyers. Some groups will not be able to afford these costs or will violate the law unwittingly. The effect will be less speech by Americans and organizations, allowing politicians to act with less accountability to public opinion and criticism.

Few bills are more antithetical to the text of and principles underlying the First Amendment than H.R. 1. The numerous, overlapping, and interrelated provisions in this legislation combine to impose and tighten severe government controls on speech about campaigns, judicial nominees, and policy issues in truly shocking ways. Any American lacking expertise in campaign finance law would have little to no hope of understanding this bill or the voluminous restrictions it proposes on political speech and association. The sad result will be a political discourse dominated by Washington, DC insiders. Far from being “For the People,” H.R. 1 is truly “For the Politicians.”

The best way to give the American people a voice and to safeguard democracy is to protect and enhance the right to free speech guaranteed by the First Amendment. While the Institute takes no position on the myriad provisions in H.R. 1 that deal with election administration, voting rights, and redistricting, the portions of H.R. 1 that trample on free speech are sufficient to warrant our firm opposition to this measure. For the above reasons, the Institute for Free Speech strongly opposes passage of H.R. 1.

[1] The Institute for Free Speech is a nonpartisan, nonprofit 501(c)(3) organization that promotes and defends the First Amendment rights to freely speak, assemble, publish, and petition the government. Originally known as the Center for Competitive Politics, it was founded in 2005 by Bradley A. Smith, a former Chairman of the Federal Election Commission. The Institute is the nation’s largest organization dedicated solely to protecting First Amendment political rights.

[2] For a detailed analyses of various provisions in H.R. 1 that would impact free speech and privacy in association, see Eric Wang, Analysis of H.R. 1 (Part One): “For the People Act” Is Replete with Provisions for the Politicians, Institute for Free Speech (Feb. 22, 2021), at https://www.ifs.org/wp-content/uploads/2021/02/2021-02-22_IFS-Analysis_HR-1_DISCLOSE-Honest-Ads-And-Stand-By-Every-Ad.pdf.

[3] See Bradley A. Smith, Analysis of H.R. 1 (Part Three): New Restrictions Target Speech by All Groups Under the Guise of “Stopping Super PAC-Candidate Coordination,” Institute for Free Speech (Feb. 5, 2019), at https://www.ifs.org/wp-content/uploads/2019/02/2019-02-03_Smith-Analysis_US_HR-1_Coordination-Restrictions.pdf. The language in the version of H.R. 1 introduced and passed by the U.S. House of Representatives in 2019 for this provision is nearly identical to the text of the 2021 introduced version of H.R. 1.

[5] For a comprehensive examination of taxpayer-financed campaign programs and their record of failure at achieving goals set by their proponents, see Taxpayer-Financed Campaigns: A Costly and Failed Policy, Institute for Free Speech (Jul. 16, 2014), at https://www.ifs.org/wp-content/uploads/2014/07/2014-07-16_IFS-Policy-Primer_Taxpayer-Financed-Campaigns.pdf.

CCP is active on both the state and federal level on legislation relating to campaign finance and election law. Our priority is working with policymakers ...

The Center for Competitive Politics’ Vice President for Policy Allison Hayward will testify in front of the Federal Election Commission this Wednesday, March 7, 2012 at ...