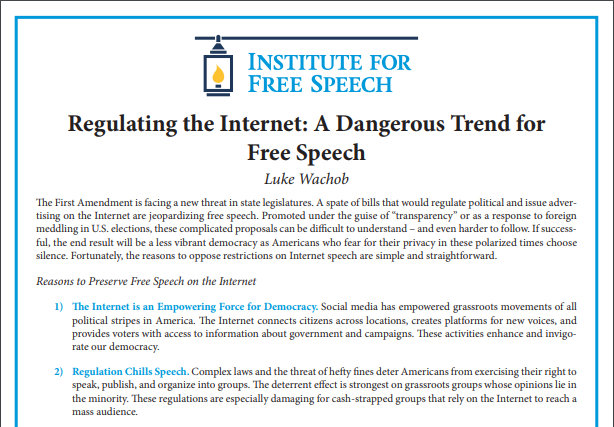 The First Amendment is facing a new threat in state legislatures. A spate of bills that would regulate political and issue advertising on the Internet are jeopardizing free speech. Promoted under the guise of “transparency” or as a response to foreign meddling in U.S. elections, these complicated proposals can be difficult to understand – and even harder to follow. If successful, the end result will be a less vibrant democracy as Americans who fear for their privacy in these polarized times choose silence. Fortunately, the reasons to oppose restrictions on Internet speech are simple and straightforward.

Reasons to Preserve Free Speech on the Internet

1) The Internet is an Empowering Force for Democracy. Social media has empowered grassroots movements of all political stripes in America. The Internet connects citizens across locations, creates platforms for new voices, and provides voters with access to information about government and campaigns. These activities enhance and invigorate our democracy.

2) Regulation Chills Speech. Complex laws and the threat of hefty fines deter Americans from exercising their right to speak, publish, and organize into groups. The deterrent effect is strongest on grassroots groups whose opinions lie in the minority. These regulations are especially damaging for cash-strapped groups that rely on the Internet to reach a mass audience.

3) Regulation Stifles Innovation. Americans’ Internet use is constantly evolving. Government should not stifle technological innovations with stringent regulation. Some Internet speech laws have already proven too complex for even the largest platforms. For example, regulations imposed in 2018 governing online ads in Maryland and Washington led Google to, at least temporarily, stop accepting political ads in those states.

4) Different Media Call for Different Rules. The interactive nature of the Internet makes it easy for users to find information about an advertiser. As a result, less information is needed on the face of disclaimers for online ads than ads placed on other media. Another difference is that Internet ads can be shorter and smaller than television or radio ads. Accordingly, they often need shorter disclaimers and more flexible requirements.

5) Internet Speech Reaches Large Audiences at Low Cost. The Internet offers groups of everyday Americans the ability to promote their views without paying for an expensive television advertising campaign. Targeting options allow speakers to reach an audience more efficiently. As a result, Internet speech is often more cost-effective than other media.

6) Most States Already Regulate Online Political Activity – and Prohibit Foreign Interference. Foreigners are widely prohibited from participating in U.S. campaigns. In addition, most states already regulate Internet ads by candidates and political committees. Expanding these laws, or passing new ones, is unnecessary and imposes regulatory burdens on groups that are often ill-equipped to comply with them.

The Internet is the modern public square. It is where Americans go to share their views and seek out the views of others. It is where they go to organize marches, petitions, and get-out-the-vote drives. It is one of the main sources for information about government, public policy, and elections. In order for the Internet to continue to organize and motivate Americans in public life, it must remain free from heavy-handed regulation. Efforts to regulate the Internet threaten both our democracy and our First Amendment rights.

The internet has arguably transformed politics more than any innovation since the rise of television-first made prominent by John Kennedy in his debate against ...