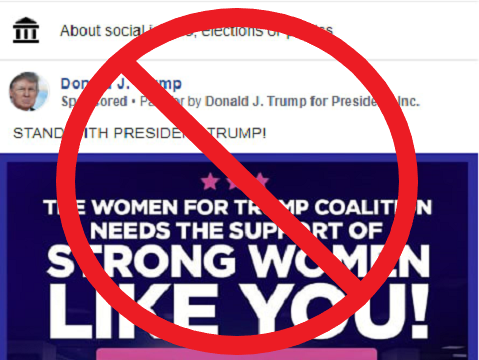 Facebook recently removed an ad run by the Trump campaign. Here it is: 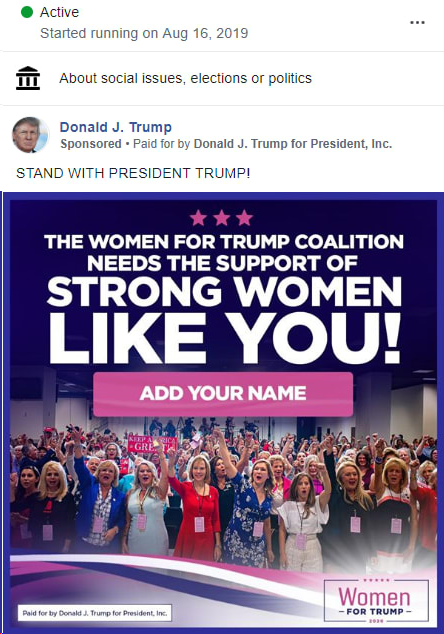 Before we get to why it is shockingly stupid for Facebook to remove this ad, it’s worth clarifying that Facebook has every right to ban this ad and any other ad that its moderators don’t want on the platform. Facebook has the right to associate with whom it wants. Full stop.

Now to the shockingly stupid part.

Facebook is allowing its ad policy to be weaponized by political operatives to suppress speech they don’t like. And in so doing, the company allows its deepest values of community building and free expression to be violated.

The Trump campaign ad above was reported to Facebook by Judd Legum, the founder of ThinkProgress – the self-described progressive news site. Legum says he specifically searched for ads by the Trump campaign that violated Facebook’s ad policy. (“Somehow, this newsletter has more resources available to review Trump’s ads manually than Facebook.”)

After Legum’s request, Facebook took down the ad. Legum is agitated that Facebook isn’t taking down more of Trump’s campaign ads, claiming that “Facebook’s neglect is putting us at risk of a 2016 repeat.” The goal here is obvious – suppress as many Trump campaign ads as possible, under whatever pretense, to minimize Trump’s chances of effectively campaigning for re-election, at least via social media.

But such a rule is so broad that nearly any ad asking the viewer to join any group that identifies by one of the thirteen “personal attribute” markers would violate the policy. In practice, this policy means that Texas Democrats can’t run ads asking Latinos to join them in fighting against the President’s rhetoric. Jews for Bernie can’t ask members of the Jewish community to support their preferred candidate. The National Black Republican Organization can’t ask other African Americans to join their cause.

And Facebook’s policy appears to go well beyond that. An ad that says “Get your hands off my Medicare” most definitely implies something about age. As does an ad that discusses wiping out “your student loan debt.” Arguably, the only ads that don’t imply something about some personal attribute are those that don’t attempt to engage the target of the ad at all.

The “personal attributes” prohibition is just one of thirty different rules that Facebook uses to justify banning ads. Some of those are perfectly reasonable (an ad must go to a functioning landing page). Some of them are arbitrary, but relatively clear about what you can and cannot do (you can’t sell tobacco or sex toys on Facebook). But many of the rules are so obviously vague that they can be read to prohibit nearly any ad. Ads must not contain “shocking,” “sensational,” or “disrespectful” content; they can’t be “deceptive” or “misleading;” ads can’t have “bad grammar.”

All of this is a long way of saying Facebook’s ad rules can, if the moderators so choose, justify the banning of any political ad.

But just because you can ban any ad, doesn’t mean you should. Wielding the banhammer against ads like the Trump ad above is just silly – no one is offended by the “personal” mention of women in the ad. In fact, as political ads go, this is about as milquetoast and inoffensive as you can get. Unless you are offended by the mention of Trump ipso facto, this ad is harmless advocacy.

But beyond that, Facebook should recognize that the ad is advocating for what Facebook claims to want, “to give people the power to build community.” This is a political campaign looking to create and grow a community on Facebook – female supporters of Donald Trump. Leaving one’s opinions about the president’s views aside, the since-banned ad seems like it should be the ideal for Facebook, akin to the ads the platform runs itself about its “Dads with Daughters” Facebook group (an ad that ironically may be in violation of Facebook’s policies.)

You can’t, however, divorce the politics from the situation. Those who view their political opponents as an existential threat will use whatever means available to decrease their chances of winning. And abusing Facebook’s ridiculous ad policy to muzzle the opposition is likely to happen more and more. If their rules don’t change, 2020 will become an election of ad tattletales, and Facebook will be in the unenviable position of attempting to explain why, given their own standards, they are leaving any political ad up at all.

Yes, Politicians, “False” Speech About You Is Protected by the First Amendment

Many false statements are protected by the First Amendment, for good reason. Determining whether political statements or ads are false or deceptive is often ...