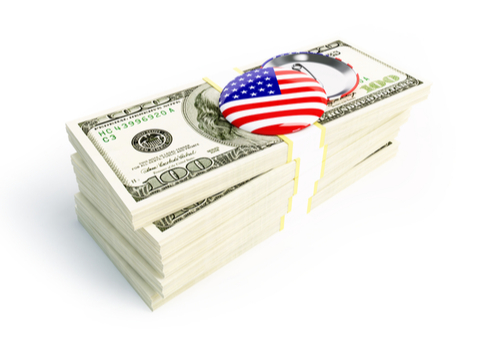 If money suppresses turnout, it’s apparently quite bad at it – even worse if it purports to buy elections. Contrary to the popular narrative, money does not corrupt the democratic process or discourage voters from participating. Even so-called “dark money,” a frequent victim of the vendetta against privacy and free association (despite accounting for a relatively insignificant portion of overall spending), is not a mechanism for corruption. If 2020 has shown us anything, it’s that the campaign against money in politics is mistaken on virtually every score.

At an estimated $14 billion, 2020 federal election spending totaled $1 billion more than the 2012 and 2016 federal elections combined. Moreover, independent spending far exceeded previous records at over $2.7 billion, compared to roughly $1.1 billion and $1.4 billion during the 2018 and 2016 cycles, respectively. Meanwhile, voter turnout was at its highest since 1908, at over 66% of the voting-eligible population.

Of course, correlation is not causation, but it’s clear that historic levels of spending did not suppress turnout. This squares with research showing that political advertising may lead voters to become more engaged, better informed, and thereby more likely to vote. Money doesn’t buy elections, but it does buy recognition, and without it, you could reasonably expect voter turnout to decline.

In Kentucky, Amy McGrath “raised the third most money any Senate candidate has raised in a single cycle,” bringing in “$88.1 million through mid-October,” according to OpenSecrets. This fundraising success did not translate to a win on Election Day, however. Despite spending almost $92.6 million, to Sen. Mitch McConnell’s roughly $60 million, McGrath lost by a nearly 20% margin. The story in South Carolina was much the same, where Jaime Harrison spent almost $132 million to lose by over 10 percent in his bid to unseat Sen. Lindsey Graham, who spent roughly $102 million. Far from being two outliers, similar outcomes, in which a challenger heavily outspent an incumbent and lost, occurred in prominent Senate races across the country.

In the regular election in Georgia, incumbent David Perdue received 49.7% of the vote while spending under $15.7 million, while his opponent Jon Ossoff won his 47.9% for roughly $28.6 million. A potential loss by Ossoff in the coming runoff would come at an embarrassing cost, as the race is set to smash the record for total spending on a single Senate race. It is important to remember that, while money does not guarantee a win, citizens have the right to offer financial support to their favorite candidates, and they are happily exercising that freedom.

And it’s not just high-profile Senate campaigns. 25 of the 27 House “tossup districts” identified by The New York Times have been called. In all but three, the highest spender lost. Those 22 losers spent an average of $1.8 million more than their opponents. Still left to be called is New York’s 22nd District and Iowa’s 2nd District. In New York’s 22nd district, Republican Claudia Tenney leads by twelve votes over Democratic incumbent Anthony Brindisi, despite more than a $3 million fundraising advantage for Brindisi. Democrat Rita Hart spent over $4 million in Iowa’s 2nd District and remains six votes behind Republican Mariannette Miller-Meeks, who spent less than half that amount.

Of course, we cannot forget Tom Steyer and Michael Bloomberg. Steyer poured nearly $320 million from his own pocket into his presidential campaign and scored a total of zero delegates. Meanwhile, former New York City mayor Michael Bloomberg spent over $1 billion on his 59 delegates, putting to bed once and for all the tired trope that money buys elections. The 2020 results add to the mountain of evidence that money can buy exposure, but it can’t buy votes.

Despite record campaign spending, 2020 saw less “dark money” than any election since Citizens United. After peaking in 2012 with an all-time high of $312.5 million (still under 5% of that year’s total spending on federal campaigns), “dark money” has dwindled, bottoming out in the 2020 cycle at roughly $102 million. That equals merely 0.73% of the election’s estimated $14 billion price tag. It equates to less than 4% of independent spending in the 2020 cycle.

This trend flies in the face of handwringing from privacy opponents that “dark money” would overwhelm political spending and nonprofits would become havens for campaign donors seeking to circumvent disclosure requirements. As the Institute has always noted, tax rules limit the ability of nonprofits to engage in politics and make them less attractive avenues for funding campaign speech than super PACs or direct contributions to candidates. Indeed, 2020 indicates that nonprofits are playing a smaller role in political spending now than at any time since they won the right to independently support or oppose candidates a decade ago.

Contribution limits claim to thwart corruption but often only limit our options in the voting booth. Advertising, yard signs, and campaign events cost money, and every American has the First Amendment right to give to their preferred candidate. When they do, they help that candidate secure the resources they need for a competitive campaign.

Take the record number of GOP women newly elected to the House – 17 in 2020, up from the previous high of 9 set in 2010. Considering the record numbers of women giving to federal and state candidates, this outcome is unsurprising. Women donors giving $200 or more to candidates, parties, or PACs provided nearly $669 million to Republicans in the 2020 federal election compared to $151 million in 2010. The same group boosted their giving to Democratic campaign efforts from $188.6 million to well over a billion during that same time frame. In total, women gave over $812 million to federal candidates and parties in 2020, over $200 million more than their 2016 contributions to those entities.

Research indicates that women presidential candidates received a higher percentage of their funds from women donors compared to men. If the trend translates to congressional races, it is reasonable to expect that an increase in women giving to federal candidates would result in more women running successful campaigns and winning office.

Once again, we see positive effects from donors supporting their favored candidates. We must wonder: how much more success could be had if contribution limits were not readily stifling voter speech?

Unprecedented campaign spending in 2020 coincided with the highest voter turnout in recent memory. It did not guarantee the highest spending candidates a win but gave voters a better chance to learn about the candidates and their positions on the issues. Nonprofits continued to account for an insignificant portion of overall spending. Women made strides both in being elected to office and in contributing to campaigns.

Candidates will always need the support of their community to succeed, and campaign giving is one of the simplest ways to provide that support. When Americans get motivated and get involved, candidates are afforded the opportunity to extend their message to more voters, and voters are given more opportunity to be informed – and empowered – on Election Day. Perhaps the overwhelming evidence from the 2020 cycle will finally put to rest inaccurate claims about money in politics.