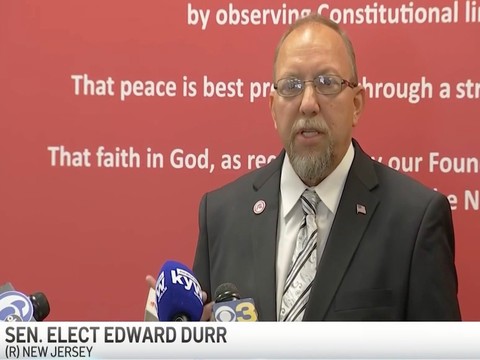 New Jersey Senate President Steve Sweeney is the second most powerful politician in the state. A “top officer in the international Ironworkers union whose influence rivals that of governors,” according to Politico, Sweeney has led the state’s upper legislative chamber for over a decade. But now, thanks to political newcomer Edward Durr, it’s time for Sweeney to update his resume.

In a stunning upset, Durr, a truck driver who campaigned on a shoestring budget, defeated Sweeney in the 3rd Legislative District contest for New Jersey Senate. Sweeney conceded to the underdog six days after the Associated Press called the race. Durr spent less than $2,200 on his campaign, according to New Jersey Election Law Enforcement Commission (ELEC) records.

Interestingly, Sweeney won his last election in 2017, in what ELEC claimed at the time “appears to be the most expensive legislative campaign in American history.”

Sometimes a powerful incumbent’s notoriety works against them, which may have been the case here. But for most challengers, reaching voters usually costs money. That’s why candidates and political groups shouldn’t be demonized for an emphasis on fundraising or political spending. Campaign spending increases public interest and engagement in elections, and that’s something we should encourage. But stories like Durr’s show that money doesn’t guarantee a win.

For examples at the federal level, look no further than New York’s 2018 Congressional primary, when outsider Alexandria Ocasio-Cortez soared to victory despite being outspent 16-to-1 by the deeply entrenched then-Rep. Joe Crowley. Or take the 2016 Presidential election, when Hillary Clinton spent almost twice as much as Donald Trump and went home with nothing but a participation trophy, even when independent groups supporting Clinton outspent those supporting Trump by 3-to-1.

Durr’s triumph over the powerful incumbent isn’t only heartening to political newcomers and candidates with modest budgets. It’s also great news for donor privacy. In 2019, Sweeney championed wrongheaded legislation that would have forced advocacy groups to publicly expose their supporters for merely providing factual information to their members and the public about the policy issues of the day. By outing New Jerseyans who associate with civic groups, legislation like Sweeney’s (which was later enjoined by a federal court) arms powerful individuals with potentially damaging information that can jeopardize nonprofit members’ and activists’ safety while simultaneously chilling free speech.

All Americans should be able to participate in democracy without fear of retribution. Here’s to hoping the newly elected New Jersey state senator will respect the First Amendment and protect the healthy, robust political and civic environment that enables outsiders like him to compete with Goliaths.

Lawrence Lessig doesn’t want to talk about campaign finance reform anymore, probably because those conversations haven’t been going very well for him lately. Instead, ...