The Free Speech Indices and You 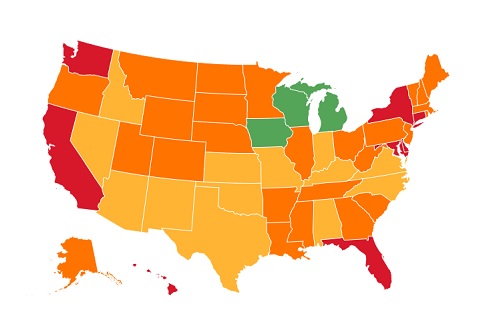 For the past several years, the Institute for Free Speech research team has been hard at work assessing and comparing how political speech is regulated in the states. We have now produced a trio of reports detailing how different forms of political expression and advocacy fare across the country. They combine to give the best possible analysis of the health of First Amendment political speech rights in the states today.

Unfortunately, our diagnosis is grim. No state succeeds at protecting free expression in all of the areas we examined. Most states fail in most areas and achieve low overall scores in our reports. But with failure comes an opportunity for change. Our research offers a roadmap to policymakers who value free speech to restore First Amendment rights in their states.

Most recently, we published the 2022 Free Speech Index, our most ambitious and detailed report ever. It analyzes 38 different variables to map the labyrinth of state laws and regulations facing citizens who advocate for better government. It addresses questions like: what kinds of speech are regulated? How much advocacy can you participate in before registering with the government? Can your political opponents initiate an investigation against you?

Those topics only scratch the surface. Everything from so-called ‘false statement’ laws to grassroots lobbying regulations to disclaimer rules are captured in our Index. We then graded each state on each variable, as well as on the totality of its laws. The results? Forty-three states earned failing grades (under 60% scores) and only one – Wisconsin – earned a score above 80%.

In performing this research, we found hundreds of laws that are almost certainly unconstitutional. Often, states stop enforcing these laws but fail to ever repeal them. As a result, citizens who read the law are misinformed about their rights. Only a small class of specialized attorneys can help you navigate the system in most states.

Is it fair to demand Americans hire expert attorneys to exercise their fundamental First Amendment rights? We certainly don’t think so, but the Index will help people of all perspectives have more informed and productive debates on questions like this by providing a solid groundwork on the state of the law today.

Earlier this year, we debuted a new scorecard of state anti-SLAPP statutes. These laws protect speakers from frivolous lawsuits filed in retaliation for their speech. Without a strong anti-SLAPP law, it can cost $20,000 or more in legal fees to get a frivolous case dismissed. Anti-SLAPP laws force plaintiffs to prove their case has merit before defendants incur major costs. If the case turns out to be frivolous, the plaintiff must pay the defendant’s attorney fees.

Despite being an increasingly vital protection for free speech, only 16* states earned A or B grades for their anti-SLAPP laws in our scorecard and 19* states had no law at all. Those asterisks are a silver lining, however, because since our report published in February, several states have passed new or improved anti-SLAPP laws. Kentucky, which had no law, passed a very strong anti-SLAPP law with near unanimous support in the legislature. Hawaii, which had one of the weakest anti-SLAPP laws in the country, passed a much stronger law. Arizona also made modest improvements to its law.

We hope to see further momentum on this issue in 2023 and beyond, as a broad coalition of groups call for states to adopt the Uniform Law Commission’s model anti-SLAPP statute.

Previously, the Institute’s 2018 Free Speech Index studied one of the most common (and commonly misunderstood) ways Americans exercise political speech rights: donating to like-minded candidates and groups. Contrary to the slogan ‘money isn’t speech,’ the ability to raise and spend money to spread a message to a mass audience is essential for campaigns and protected by the First Amendment. It is especially important for new candidates and challengers who lack the wealth of a billionaire or the name recognition and campaign infrastructure of an incumbent.

Unfortunately, incumbents write the laws, which may explain why most states impose low and unjustified limits on campaign giving. Only ten states (eleven at the time of the Index’s publication) impose no limits on how much people may contribute to the candidates of their choice. Notably, no evidence shows that this leads to greater corruption – just greater freedom for candidates and voters.

Anyone interested in how First Amendment rights to speak, publish, assemble, and petition the government are regulated in the states should spend some time with our new Index, and all three of our reports. The first step to achieving greater freedom of speech is knowing what stands in your way.

Can the Dead Corrupt Politics?

Can a dead man’s unexpected donation corrupt the political process? That’s a question the Supreme Court may answer if it decides to hear the ...