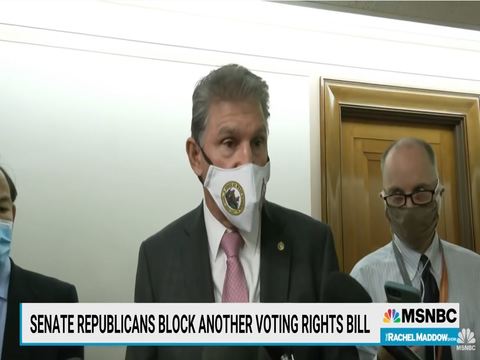 Some federal lawmakers have stopped at nothing this year to advance their bundle of political speech restrictions, first as H.R. 1/S. 1 (the “For the People Act”) and now as S. 2747, the so-called “Freedom to Vote Act.” When it fails, it’s reintroduced. When it’s criticized, it undergoes a superficial compromise. And when it’s Free Speech Week, it gets every Democratic vote in the United States Senate.*

Thanks to unanimous opposition from Senate Republicans, the measure failed to advance Wednesday, once again frustrating its direct attacks on free political speech. The bill’s “Honest Ads Act” is one such attack. Grassroots organizations and advocacy groups that rely on cost-effective internet communication would be harmed the most. Internet platforms hosting ads about legislation or political issues would have to maintain public databases detailing granular information about the ads, their reach, and their sponsors for any group or person spending over $500. It’s not an effort to rein in stray campaign speech, which is already aggressively regulated. The bill’s vague language would apply to issue ads that don’t mention a candidate at all. Any ad concerning a “national legislative issue of public importance” (an undefined term in the bill) will suffice. The increased cost and new liabilities for hosting such messages would discourage many internet companies from running them at all, and the result will be a much less vibrant political discourse online.

“Honest Ads” would even regulate online issue ads that mention a lawmaker seeking reelection in another state where the ad never appears. Imagine an ad about an agricultural bill pending in Congress that airs in California. It says that the bill needs Majority Leader Chuck Schumer’s support to gain momentum and that you should call to request his help. That’s now a regulated communication, even though it’s not about elections or about California’s elected officials.

The measure’s DISCLOSE Act is equally troubling. Its provisions would tell the political opposition where a group’s supporters live. Many nonprofit advocacy groups would be forced to “name and shame” their own supporters, providing the government with their personal information to display in a public database. To exercise your most fundamental First Amendment rights, Senate Democrats would first have you make yourself vulnerable to harassment, intimidation, and threats of violence.

The bill would also ramp up federal speech-policing. While the direct partisan takeover of the Federal Election Commission proposed by H.R. 1 and S. 1 was dropped from S. 2747, the new bill destroys bipartisanship and any semblance of impartial enforcement at the agency all the same. The bill would empower the FEC’s general counsel to take whatever enforcement actions he or she pleases unless a bipartisan majority of commissioners objects within 30 days. To speak on political matters, groups would have to avoid drawing the ire of this new federal speech czar.

The bill’s sponsors don’t stop at restricting and policing speech; they dare to compel it as well. H.R. 1’s more aggressive taxpayer-financed campaign program was dropped from S. 2747, but what remains is just as misguided. Under S. 2747, states would be encouraged to design their own systems, which would then receive federal subsidies to fund U.S. House campaigns. If the federal government approves a state’s plan, Americans will have their tax dollars redirected into the campaign coffers of politicians they would never choose to support. And, of course, these schemes would be overseen by the newly temperamental FEC.

* Except Majority Leader Chuck Schumer, who changed his vote from “yea” to “nay” for procedural reasons.

Recent decisions by social media companies to ban or suspend former President Donald Trump and others from their platforms are legally protected. The First ...