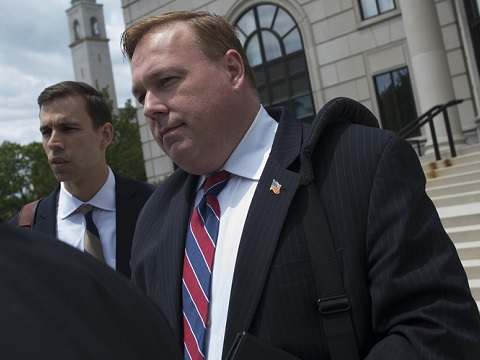 Editor’s Note: This is the third in a series of posts examining the speech-limiting effects and record of failure of taxpayer-financed campaign programs, specific to provisions included in the so-called “For the People Act,” which House Democrats have introduced as H.R. 1 in the 116th Congress. Part I is available here, part II is available here, and part IV is available here.

One of the most common arguments for taxpayer financing of campaigns is the claim that these programs would stop or severely reduce corruption. By supplementing private donations with taxpayer dollars, the thinking goes, politicians would not engage in corrupt acts to win the favor of big donors.

In reality, tax-financing programs create new incentives for corrupt candidates, or corrupt staffers and campaign consultants, to cheat and defraud the taxpayers. H.R. 1 would be no different.

When Willie Sutton was asked why he robbed banks, he said it’s “because that’s where the money is.”

Any system which promises large sums of taxpayer funding for private individuals can be ripe for abuse. And in H.R. 1’s proposal, if you want to raise money for campaigns, tax funding is where the money is.

The bill would offer participating candidates a 600% match for donations up to $200. So a $50 gift would be worth $350 in total. A $200 contribution would generate $1,400 in cash for the campaign. In some cases, the match soars to 9 to 1. In total, each House candidate would be eligible for up to nearly $5 million in taxpayer funds.

The potential for abuse is obvious. As has happened in Arizona and New York City, campaigns may be motivated to give money to straw donors who then turn around and give that money right back to the campaign – and receive a 600% match from the government. Or campaigns might simply make up donors. There are some protections in the bill against fraud, but it is not at all clear these would prove to be sufficient deterrents. And it’s not clear the Federal Election Commission will be able to ferret out fraud, or if Congress would give the agency sufficient funds to do so. The number of contributions and total volume of donations matched would be far beyond what the FEC has had to process in the past, back when presidential campaigns usually ran on public subsidies.

The New York City Campaign Finance Board, the local analog to the FEC, has an annual budget of over $20 million, not counting the subsidies it doles out. It only has to monitor fraud every four years, and candidate subsidies run roughly $40 million to $50 million in an election cycle. All candidates who receive subsidies go through audits. Meanwhile, the FEC spent about $78.5 million in 2018.

The total subsidies given to candidates later investigated for fraud or corruption-related offenses in New York City have been considerable. An Institute for Free Speech analysis found that the city’s tax-financing program doled out nearly $20 million to such candidates between 2001 and 2013.

Even if a candidate is running for office for the right reasons, the temptation for candidates and staffers to abuse the system would be strong. But it’s hardly a leap to believe that some corrupt individuals could start running for office with no intention of winning, but simply to profit at the taxpayer’s expense. In fact, we’ve already seen that happen in states with tax-financing programs for their legislatures. And those systems present fewer incentives for plunder.

Arizona has one of the oldest taxpayer-financed campaign systems in the country. Not shockingly, it also has a long history of politicians abusing the program.

Perhaps most brazen was Yurikino Cenit Downing, who ran for the Arizona House of Representatives in 2004. With the help of two of his friends, Downing’s “campaign” misused over $100,000 of taxpayer money, squandering much of the funds on parties at nightclubs and restaurants. While his abuse of the public’s trust was eventually exposed, the fines levied were only $15,000.

Downing was far from the only candidate in Arizona, or elsewhere, to try to cheat a tax-financing system. Candidates have done everything from submitting false documents to the matching program, to spending public funds on a family member’s business, in order to profit off the taxpayers’ generosity.

In New York City alone, the abuses are shocking in their scope and regularity. One candidate was convicted of accepting bribes, extorting money, and other questionable behavior that netted him approximately $200,000 in “illegal rent, expenses and payoffs” – including extorting a Bronx boiler company executive who collected a $283,000 Yankee Stadium contract with his assistance. Another candidate couldn’t provide any justification for any of the nearly $121,000 in public funds he received and ultimately pled guilty to converting over $100,000 in taxpayer funds to personal use through various illegal schemes in which he approved and submitted fabricated documentation to the city. Still another went on a post-election spending spree, blowing nearly $10,000 in taxpayer dollars on airline tickets to Florida, tourist attractions in the Sunshine State, restaurant bills, MetroCards, and phone bills. These stories just scratch the tip of the iceberg of corruption scandals in New York City’s system.

While these candidates were fined (or worse) and ultimately forced to repay the public funding they abused, it’s difficult to argue that the structure of the program didn’t incentivize these individuals to commit fraud and abuse on the public’s dime. Certainly, their participation in the City’s public financing program didn’t make them “cleaner” candidates either.

Seattle, which recently had its first election with tax-financing in the form of the city’s “Democracy Vouchers” program, already saw its first allegations of fraud. A candidate for City Council was accused by her campaign manager of contributing her own money to the campaign and claiming it came instead from small donors. This would have entitled her to $100,000 in public financing had she not been turned in by her former campaign manager (and defeated in the primary).

Implementing a tax-financing system for Congressional candidates is unlikely to make politicians more honest or less corrupt than they were before. The program would simply give honest candidates a subsidy they do not need, and give corrupt candidates new avenues to abuse the system for personal gain. Is this a wise use of taxpayer funds?

Ultimately, whether Americans have honest politicians or not will come down to the voters, not whether government forces taxpayers to fund their campaigns.

Over at NPR, Peter Overby reviews the decline of the Presidential Public Funding Program. Created in 1972, the program provides tax dollars to presidential ...